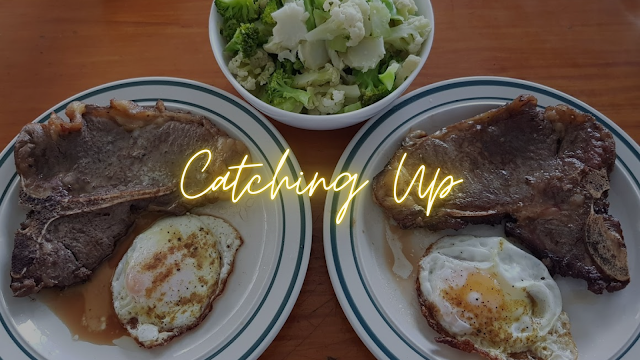 Metro Manila Community Quarantine - Day 513
I didn't have work today since it's National Day in Singapore. But since Tobie still had work, that limited what I could actually do since most of the most fun stuff would typically involve Tobie.
So I stayed up a little later than normal last night in order to get in more reading. I woke up a little later than normal, but it was still before 9AM, so that's not saying much. But I used the time to read some more while waiting for a Lazada delivery that ended up arriving in the early evening, which is atypical.
Given I've mostly been limiting myself to yoga these past days because I was feeling rather stressed and less motivated to work out, I really wanted to make up for that with my workout today. I still didn't push too hard since I doubt I had the motivation for that. But I still managed a challenging routine and had time to spare for a longer restorative yoga flow, which helped to balance things out. And I felt pretty accomplished about that.
Some Star Trek ships arrived via My Shopping Box. Our drag queen shirts created by Pride Studios also arrived via LBC, which was a nice surprise. My only 8.8 Lazada order that arrived was a new wireless charging pad for my phone, but that's still a welcome addition to my home office setup.
Tobie was busy for most of the day, so I stepped out to get some replacement parts that we needed to address a leak in our toilet. We weren't able to get the building maintenance to install it just yet, so we'll have to try for that tomorrow. And then I cooked us a hearty lunch of steaks, eggs, broccoli, and cauliflower. The steaks were a gift from Tobie's mom and they actually work out well for sort of quick-service lunch when you're pressed for time.
Then I spent the rest of the afternoon unboxing some of my Transformers purchased earlier this year, which remains to be a comforting activity for me. Sure it takes up a lot of time and organizing, but it does make me happy in its own way.
So I got a fair amount done and now my little extended weekend is quickly coming to an end. I could have relaxed more or done more or read more, but I'm still happy with how things turned out. I got to enjoy myself while still helping out with the chores and relieving Tobie of some of the hassle of needing to worry about these things as he got through all of his Monday stuff.
I just have to be ready to deal with my own post-long weekend backlog tomorrow.
food adventures holidays sietch life Tobie toys Transformers work