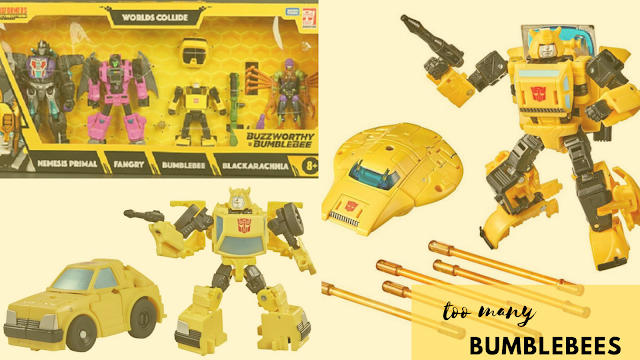 Metro Manila Community Quarantine - Day 509
Rather than discuss the ridiculousness of the latest round of ECQ, I'll just rant about Transformers today.
Bumblebee is not my favorite Transformers character. But right up there with Optimus Prime, every new toyline is bound to include several versions of both of those characters, and it all really adds up. And the fact that there is now a sub-line called Buzzworthy Bumblebee that is all about taking Bumblebee love to a whole new level, it's kind of bonkers.
It would have been easy to ignore this toyline since I'm not a fan of the figure. But the fact that they have been using this line to introduce variants based on designs from the Generations line that I do collection, the completionist in me keeps thinking that maybe I should cross over and get them.
My level of temptation reached new levels with the release of Origin Bumblebee, which is the first time we're getting a Bumblebee that transformers into the UFO-style vehicle he transformed into while they were still on Cybertron in the pilot episode of the G1 cartoon. But it's a Target-exclusive in the US and that has resulted in and other Buzzworthy Bumblebee figures being unusually expensive when they get here. I got this close to pre-ordering the UFO version, but in the end, I waited too long and I've missed the pre-order slots.
I don't feel entirely bad about it - this is still Bumblee and they had to include those silly power rods just to justify a Deluxe-class price point. But I know that my near-decision to get it was driven more to the thought of scarcity making it somehow more valuable?
Hasbro has really been pushing hard on signing exclusivity deals for different figures for what are largely repaints and retools of existing figures and it drives me nuts. But as a collector, I keep falling into the trap just to say that I didn't miss any figures from the line. Does this give me anything in the long run? Maybe not much more than a weird almost-feeling of satisfaction. But I also need to keep my purchases smart in order not to waste money or waste our limited storage space for figures I don't truly love.
But... I still kinda want him.
sietch life toys Transformers