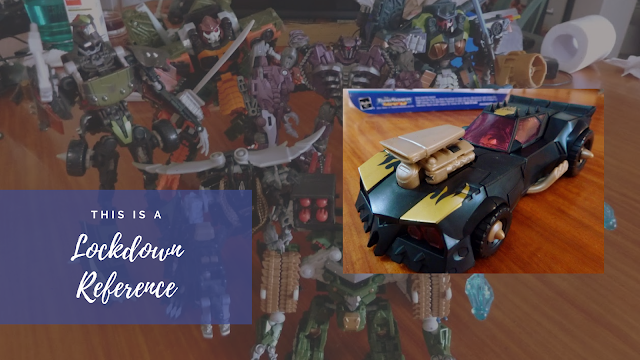 By sheer coincidence, I had to leave the Sietch today for family errands. It's my monthly medicine restock day, and thus I was given the opportunity to see what effects the lastest quarantine declaration has had on everyone's life in BGC and the results were...confusing?

First, my being in a workshop the whole day prevented me from properly appreciating the nuances of the additional restrictions added to our General Community Quarantine (GCQ) with Heightened Restrictions, which our LGU is now calling HGCQ. Some of the new rules include stopping all dine-in options (which only took effect today) and limiting travel in and out of the Metro Manila Plus area as a way to stem the spread of the COVID-19 delta variant beyond this metropolitan area. It feels a little late for this given how many Delta cases have already been identified in different provinces around the country, but whatever administration - you do you. And on top of all that, we'll formally go back to ECQ on 6 August and this will stay in place in Metro Manila for 2 weeks.

So in classic pre-ECQ fashion, there were particularly troubling queues at grocery-style establishments today. My monthly errand involves going to Mercury Drug, which has a small grocery component in the store. I was surprised to find quite a significant queue outside and I was just glad that I had called in my order ahead of time since they always allow phone order people to in regardless of such queues. Despite that fact, I still had to wait a while before I was served since the branch was suspiciously understaffed behind the counter. I mentioned this to the pharmacy attendant who helped me with my order and he did admit that they had a few absences today that complicated things. Poor guy - he looked pretty stressed. And you don't want people making mistakes while dispensing medications. Just looking at my phone-in order, there was an above-average number of inaccuracies that we had to remedy before I confirmed the order. But I didn't give them flak about it - these things happen and calling in a complex medicine order really isn't 100% ideal. but it is what it is.

There were still a good number of people on the street, but I think many were discovering that dining-in was no longer allowed. Thus were significant take-out queues at weird trendy places around BGC like that Because Coffee shop that I doubt I'll ever buy coffee from. We also didn't have that closed-off area on 5th Avenue this weekend, since that extra space was used to add more al fresco dining spaces on the street.

There were still a significant number of people at different open-air spaces like parks and some were even using the park benches as al fresco dining spots. They simply ordered take-out from nearby restaurants and then went to the open spaces. That'll change when we go to full ECQ, so I guess it was smart of them to take advantage of this temporary loophole while we're under "HGCQ". And maybe it was just me, but you could see a certain sadness or maybe conditioned helplessness in terms of the body language of different restaurant workers whose establishments had been reduced to take-out stations. A lot of places would have a staff member literally standing on the curb in the hopes of almost immediately responding to anyone who might walk by and decide tot place an order.

Tobie still has to go to the grocery tomorrow and I hope he won't have to deal with overly long queues again. But given what I managed to observe around the area, the lines are bound to be longer than usual regardless. There's nothing like a lockdown announcement to get people to rush to add to their stores and supplies just to feel safer about not running out of stuff. And yes, I know this relies on people having sufficient income to restock at will in response to the government announcement and is a level of privilege in itself.

Despite all this, face shield usage was all over the place today. It probably didn't help that it was pretty windy, and I saw more than one person chasing after a flying face shield. Heck, the same thing happened to me to, but given I almost always had a hand on my face shield, it never flew too far away. It was super annoying, but it's still the rule and so we just follow for now.