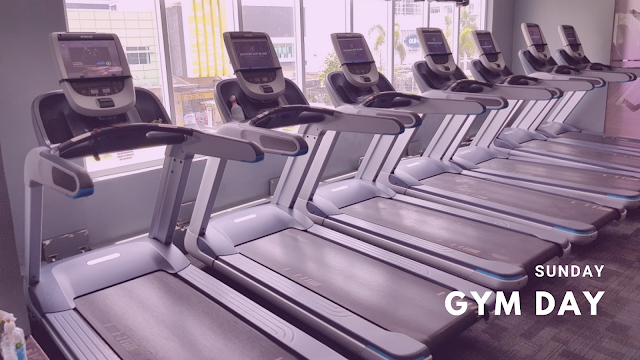 Metro Manila Community Quarantine - Day 477
So I did it! I actually went back to the gym today. It was still kind of terrifying, but I barreled through and still did it.
I had set an appointment for 10:30am and got there right before 11:00am (because of quality time with Tobie). I went through all the hygiene theater upon entering including logging in via the StaySafe.ph app and seriously wiping my feet since I'd be wearing the same shoes in the workout area. No one actually tried to verify my appointment, but it's just as well since there were only 2 other guys in the guy and both were busy with the machines. That left the functional fitness area just for me, which is what I wanted.
The workout I had selected specifically needed a mix of different dumbells and a moderately heavy kettlebell. Apparently, it was a workout that I had done before since it was already downloaded to my phone, but it felt rather new to me. Then again, it has been over a year since I had last done any of the Nike Training Club app routines that involve more diverse equipment, so it'll all feel new to some degree.
On its own, it was a good workout that had an exciting amount of diversity and challenge. The true difficulty I experienced during the workout was managing my double mask situation. Midway through the workout, both masks were pretty drenched and in certain positions (mainly when I'd be facing the floor), the dampness of the mask would result in a near air-tight seal whenever I'd breathe in deeply. I had to experiment with different ways of breathing. I tried to manage the extremely humid environment I had created behind my mask in different ways in order to get all the way to the end.
I'm not sure how I'm going to manage that better moving forward. Maybe I should try to change my inner disposable mask mid-routine or at least using a thicker cloth mask that might absorb more sweat, thus buying me more time? I'll just have to continue to experiment.
As I still had some time left in my 1.5-hour slot, I was lucky enough to catch the one and only available treadmill and did some simulated rolling hills hiking as my cooldown cardio activity. For some reason, their interpretation of social distancing meant only making one out of 6 treadmills available for us, so I may not consider this as a priority in the future. I'd probably be better off jogging around BGC anyway.
On the whole, it was nice to be back but I don't think I feel safe enough to try doing this on a near-daily basis just yet. As originally planned, I'll continue to limit my visits to those workouts that the app assigns to me that just happen to involve more equipment, which may mean just going to the gym on weekends. For the rest of the week, I still have more than enough yoga and bodyweight-based circuit training to keep me busy at the Sietch.
Plus man, I've gotten the different sort of tired one feels after weight-based activity. I only had like a 30-minute workout today, but I feel sore across my arms and legs. I hope I didn't overdo the weights in my eagerness. We'll find out for sure by tomorrow, I suppose.
Last item: I'm becoming increasingly obsessed with figuring out Transformers-related content for my TikTok account. I really don't expect to do dancing things or even those comedy bits. But I do want to figure out a format for featuring my different collectibles including my Transformers, Star Trek Starships, and maybe even our board game collection. But I also want to figure out a method that minimizes the work that I need to do in order to get more videos out sooner with a minimum amount of production effort. Only time will tell.
gym life health social networking toys Transformers