029DF: Talking About Tsokolate Instead 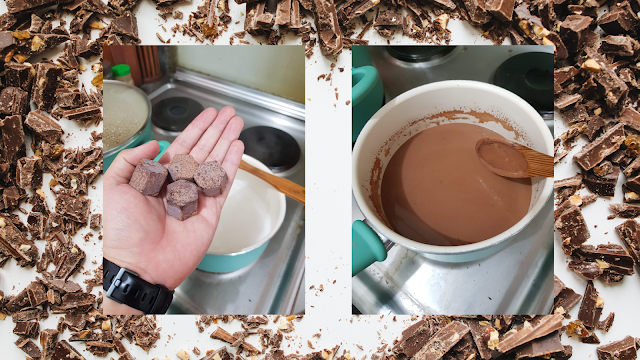 Metro Manila Community Quarantine - Day 466
New Running Update: Now having Tobie check the TRACE Taguig site on a daily basis in the hopes of securing an A4 vaccination slot. We checked again today and only found slots at some hospital/medical center deeper into Taguig. For now, we're holding out for something closer to BGC or at least at a part of Taguig that Tobie is comfortable traveling to given he'll most likely have to go to the vaccination center on his own. This will require a fair amount of patience and perhaps more frequent TRACE checking.
So apart from a lot of stuff going on at work and continuing frustrations with the government, I'll just talk about our recent hot chocolate experiments.
A Baduy Pride episode about chocolate led to our friend sending everyone in our gaming circle some tablea for all of us to try, the real challenge was figuring out how to use it while staying keto. Traditional Filipino tsokolate (hot chocolate) is not the most keto of recipes. But the instructions also included a keto style for making it that involved coconut milk, so we figured that things would work similarly with the likes of almond milk, and so we went with that.
I'm not the biggest fan of almond milk since I feel like it has an odd aftertaste when added to coffee. And since I don't particularly miss milk all that much, it's not something we keep large quantities of. But Tobie wanted us to try the tablea together and made sure to purchase some almond milk just for that purpose. I wasn't 100% confident about how it would respond to heat, but why not, right?
So we finally made our first batch the other day and I think it turned out okay. It's freaky bitter with just the tablea and the almond milk so I still needed adding something as a sweetener. Tobie felt there was a bit of a burnt taste in the first batch and I'm not sure if I overdid the heating of the milk or it's just a natural consequence of heating almond milk. We made another batch today and I tried to keep the heat a lot more controlled and didn't let it get all the way to a roiling boil, as it were, and I feel like it still largely tasted the same. Tobie said it was okay, but at least it wasn't inedible.
I want to try it with coconut milk, but it's always confusing to figure out which type to use. There are variations like just gata versus coconut cream versus coconut milk in a can and the sort of organic coconut milk we see in cartons at the likes of Starbucks. And I only really like the last one - all others I'm more used to use for savory cooking and I don't know how that factors into sweeter things like hot chocolate or just desserts as a whole.
I don't invest a lot of time into these sort of keto alternatives to things since the effort can get a little annoying, but at the same time, they still make sense. I'm glad that our friend sent us the tablea to try - it has helped me to shake out of my keto complacency and try something new. Similar thinking is what got me started on baking keto pandesal every week. But man, I really need to branch out and try other things versus just buying desserts from keto suppliers. Not sure when I'll get around to it, but it remains something to consider.
food adventures health keto life QuaranGeeking sietch life Tobie