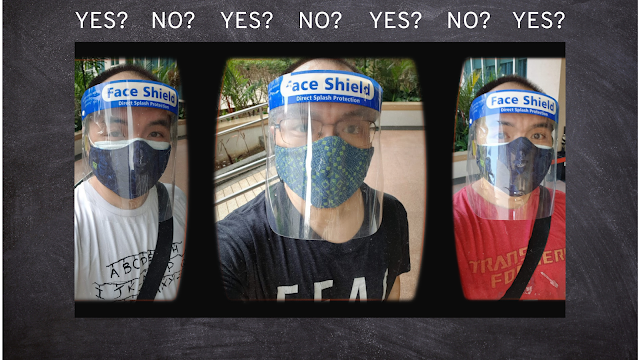 Metro Manila Community Quarantine - Day 464
As much as we hate face shields and argue that they're not practically effective, Tobie and I do our best to follow the rules as they are set now because we're that sort of people. It doesn't help with our leaders can't quite agree on whether or not we should still be using them or where we should be using them. The only thing worse than incorrect information is inconsistent information that changes from day-to-day.
It started with secondhand information from Senators stating the President say they didn't have to wear their face shields. And of course, the media circulated this and got people excited about it. This morning the Presidential Spokesman stated the IATF had never required face shields outdoors and the President supported not requiring them outside of specific circumstances. But of course, things turned around within the same day and now the President has stated that he is requiring face shields at all times whether indoors or outdoors. Thus this makes the past weekend's face shield discourse all the more useless.
And it's this sort of inconsistent flip-flop behavior that further weakens our confidence in this administration, particularly their response to this global pandemic. It makes it even harder to believe that they actually have a handle on things. The numbers don't lie though - things are still not fully getting better. And the people telling us that we need to continue using face shields whether indoors or outdoors just happen to not be wearing face shields during their televised address because of course, that's why they're going to handle things. The inherent disrespect towards us as citizens continues to grate on me.
In other news, the City of Taguig continues to push out materials that indicate that the A4 classification includes people who live and work in Taguig without really going into detail about which types of workers or roles are in this category or things like that. So we've toggled Tobie's classification in the TRACE app to A4 and now we're just waiting for more appointment slots to open up so we can get him queued for a shot. I'd feel a LOT better if we can finally get that ball rolling.
Given our ongoing government response, getting everyone in my immediate social circle vaccinated as soon as possible has become even more of a priority. It has become a weird side question to ask friends out of the blue if they've already gotten a chance to get a vaccination appointment. I don't mean to pry - I just want our friends and family to safer during this pandemic. And it's not bad to want that, right?
health inner ramblings stop the presses Tobie