029CE: Of Giant Robots and Sundays 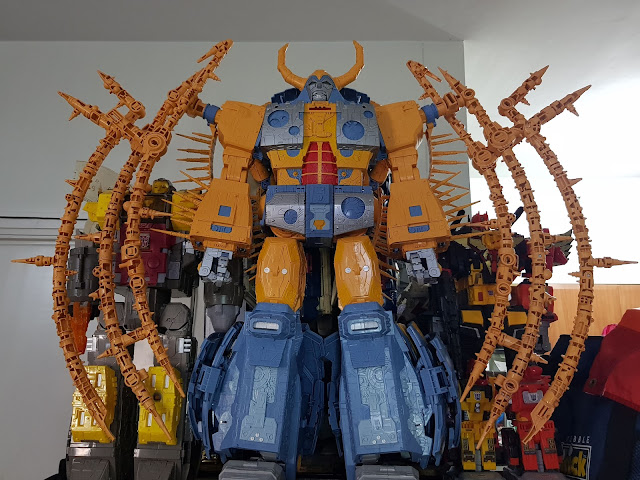 Metro Manila Comunity Quarantine - Day 449
So I finally did it - I unboxed Unicron. Tobie had to help me maneuver things such that I had a decent working space to deal with this ridiculously large Transformer and we even set up a Facebook Live to capture the 2+ hour process of unboxing, transforming and documenting this landmark moment in Transformers history. I don't think Hasbro will ever (or should) top this figure and I'm glad that we have it. It's a crazily indulgent purchase, but hey these things are sort of once-in-a-lifetime.
We're testing his stability without his obnoxiously large stand, but we'll see how it goes. While there's no question about him being a big figure, the stand takes up a LOT of space, which makes sense since it has to be able to balance him in planet mode. I just wish it wasn't so...square? But he looks great, regardless. And fingers were rather sore after those two hours of work to get him from "transport mode" (fresh from box), to planet mode, and then to robot mode.
But I really do prefer him in robot mode. He's a gorgeous-looking feature, even if transforming him was all kinds of stressful. He has some heavy-duty ratchets in order to support his own weight and just maneuvering him into different poses takes a lot of strength. I had watched a few unboxing and transformation videos even before I considered attempting to work on mine just to make sure I would avoid making any mistakes and damaging this figure during my first transformation effort.
Beyond that, it has been a good Sunday. My workout went pretty well and this marks one of the first times in a long while that I REALLY feel like I'm back to my previous level of strength. I even weighed in below 75kg again after some heavy weeks after my first vaccination shot. So yeah, happy vibes on the health and fitness front, and that's always worth celebrating.
And then our afternoon involved a very fun one-shot RPG session using the Praxis system. Today we played the Witch scenario, which was more of a horror-themed experience. But I was really happy with the story we ended up crafting together, especially since our game involved someone we had never gamed with before. You never quite know how these things might go but today was definitely a good day and perhaps we'll be able to game together again in the future.
Another work week begins, but I feel a lot better about how we spent this weekend versus last weekend for some reason. I still miss being able to have fun with friends in person, but things aren't that bad. They could certainly be better and they could be worse. So there's that. Let's see how things go from here.
gaming gym life health sietch life tabletop gaming toys Transformers