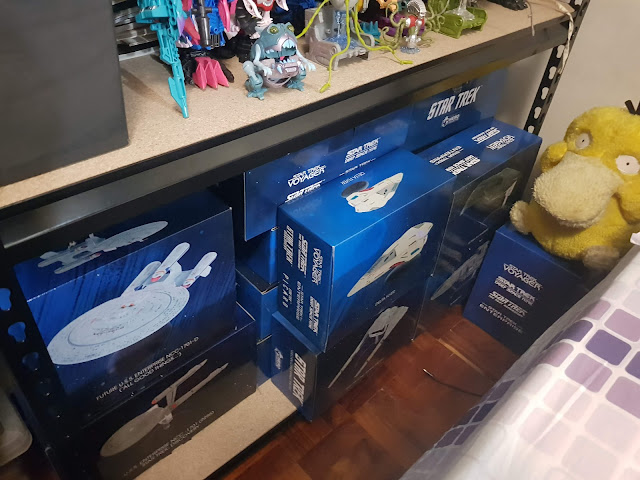 Metro Manila Community Quarantine - Day 445
Our mid-week Vampire game didn't push through today, so that left me with some time to move more geeky things into the shelf that Tobie had just assembled. The bottom shelf had been earmarked for the Star Trek ships that defy more organized storage and I didn't quite know how I was going to embark on this particular Tetris journey.
Allow me to unnecessarily explain.
The Eaglemoss Star Trek Official Starships Collection has been one of our weirder indulgences over the years that has significantly contributed to our ongoing geeky storage issues at the Sietch. The regular ships generally follow a particular size that is fairly uniform and stores effectively in our big plastic bins and similar storage solutions. But over the years, they have also included a variety of special issues including unique space stations or XL-sized versions of different hero ships from the show. These ships are, of course, beautiful. But they're a pain to store.
Over time they had developed into this layer of ships fit together in true Tetris-fashion but had entirely blocked off one of the shelves from regular access. In other words, pulling out games from that shelf would first require someone to carefully deconstruct the Trek wall (it was no longer a single tower), get the game, then put things back after playing.
So figuring out a better way to store these ships had been one of the goals for the new shelf. Tobie even arranged the bottom shelf to be a little taller to (1) not block my knees when I get into bed and (2) provide more storage space for the rather large and irregularly shaped boxes of these special issue ships. The free time this evening gave me time to work on this effort of shifting things around to get things in place.
But of course, it was a multi-step process.
Some of these ships had actually made it into bins, so I took those out and dedicated the bins to the many figures of the first two waves of the Transformers Generations War for Cybertron line - Siege and Earthrise. That freed up the boxes I had been using as temporary storage, but I figured it was prudent to leave those where they are because I still have the Kingdom figures to unbox and shelve.
Then I gathered all the other special issues, sorted them by approximate size similarity to make for more efficient Tetris-style arranging instead of sorting the Special Issues from the XL Issues separately (which is what I really wanted to do). Then I started putting them in and realized...I only have just enough space for the existing ships with little to no room for more ships. And of course, more will be inbound because my Star Trek ships are an ongoing "problem" of the fun kind. But at least things are better now. 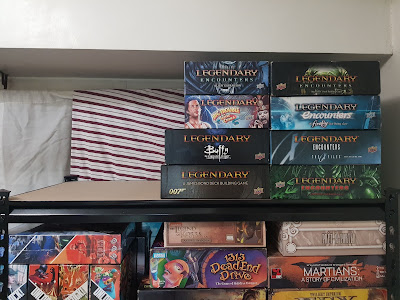 Then I wanted to experiment with gathering the non-Marvel Legendary games and give them a new home up there. But I had overestimated how many Legendary games we had, so I ended up with a fair amount of free space. I condensed them into two stacks to leave some empty space. While writing this post I decided to move some of the regular Star Trek issues that had been waiting in queue for a longer-term home so they're out of the way but still generally nice to look at. Relief.
The real solution is to map out moving to a larger place that can better accommodate all of our geekery. Not sure when we'll ever be able to manage that, but we'll see how things go. Stranger things have happened and Tobie and I can be pretty determined when needed. But it's hard to find an affordable space larger than 50sqm in BGC. Most places cost an arm and a leg and tend to come furnished. In truth, we just need a super empty unit that we can line with as many shelves as possible in order to store more of our things. That really would be the ideal. Maybe one day.
gaming QuaranGeeking sietch life Star Trek tabletop gaming Tobie toys Transformers