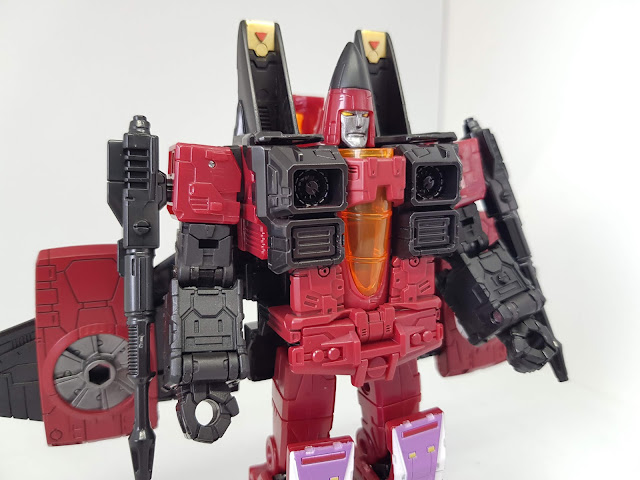 Metro Manila Community Quarantine - Day 444
More and more, Hasbro has been resorting to exclusivity deals with different retailers for certain figures. The challenge is that these are typically US retailers, which creates scarcity for collectors who live outside the US. This isn't entirely new and it wasn't as big a problem during non-pandemic times. But COVID-19 has significantly impacted the global supply chain and logistics have been less than ideal.
And since I'm a bit of a completionist for this particular line of Transformers toys. I've more or less faithfully purchased almost every release across the history of the Generations line. But now I'm stymied by these limited distribution models.
The most painful figures I've missed out on are Ramjet and Dirge, who were released as an Amazon-exclusive Seeker Elite set. I was hoping that there'd be some sort of an Asian release through Takara that would make it to local retail, but never happened. I had signed up for one pre-order via Hobby Korner, but COVID-19 complications caused that pre-order to get canceled. So now I still don't have these two conehead seekers but I have Thrust, the third member of their trio. That sort of stresses that I still don't have them to complete the set!
On a similar note, there's the Target-exclusive Decepticon Runabout, who is the partner of Runamuck. Runamuck was a regular release and I got him without issue. But his literal recolored clone has never hit local retail officially outside the hobbyist stores that I haven't been visiting because of this whole pandemic.
We're already mid-way through the next Generations line after Earthrise, which is Kingdom, which means I have to stop holding out to get them at a more affordable price at local retail and start resorting to the secondary market. This week I've actually been scouring eBay with one seller in the US and another in Singapore that I'm watching. The figure feels ridiculously expensive versus its original price (like at least double the price of my canceled pre-order), but supply and demand have taken over and I really DEMAND to get my hands on these missing guys.
I'm paying an arm and a leg versus US retail, but else can I do, right?
inner ramblings QuaranGeeking toys Transformers