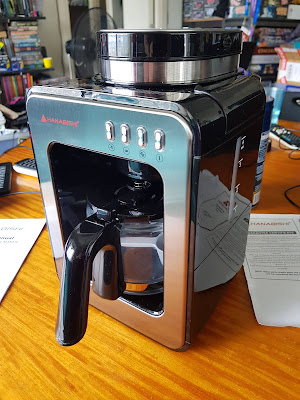 Metro Manila community Quarantine - Day 441
I feel like I've been rather inefficient today. It has been a generally good weekend thus far, but I also feel like I haven't been able to get a few recreational activities done. It's my own fault of course - I took a while to fully get out of bed. I should have worked out sooner. The list goes on. But it is what it is, I suppose.
Instead of thinking about that, I'm going to write a blog post about coffee makers, because I've been sitting on this discussion for a bit.
Less than a year ago, I purchased the above Hanabishi 2-in-1 grinder and coffee maker during the Lazada 8/8 sale. It was pretty cheap for the promised features and it addressed an immediate need in the form of our existing Krups coffee maker finally dying after many years of service. Does it allow us to make coffee from beans directly? Totally - the first cycle will grind the beans, then proceed to brewing and you get your little pot of coffee. But if you want more coffee from freshly ground beans, you'll need to clean out the machine and then reset things. So it achieves its goals at the bare minimum level, and it has generally been helpful.
But if I were to be fully honest, what I really want is a machine that always makes freshly brewed coffee available at the touch of a button but not one of those single-serve pod coffee makers (e.g. Nespresso machines). Fully automatic machines like that tend to cost a heck of a lot of money, but they're really quite cool. You just need to keep adding coffee beans and water and periodically you'll need to clear the repository that collects all the used coffee grind. My sister has one for her home and it's amazing (except she has to use decaf coffee) and the Singapore office had a bigger one they got from an office fire sale. Major envy.
And while this Hanabishi unit gets the job done our limited coffee needs during quarantine, it really doesn't do well in terms of making it easier to prepare coffee for friends, which was something I'd always look forward to during game nights. Our previous Krups machine had a 12-cup capacity, which means I could safely prepare 5 full mugs of coffee, 6 if I reduced the levels a bit to even things out. I can't do that efficiently with the current machine since I can only brew 2 mugs at a time (4-cup capacity), and that's without thinking about the need to clean the machine every cycle.
Given all that, of course I have options. The most reasonable bean-to-cup automatic coffee maker I could find is the DeLonghi Magnifica S, which is retailing for at least PHP48,800 on their official Lazada store. That is still a LOT of money for a coffee maker, so I'm not exactly jumping on it right away. But I am watching it in case it miraculously becomes cheaper during one of the now-monthly Lazada sales or something like that.
It's hard to justify buying it at the moment since (1) the current coffee maker is less than a year old, (2) it is working perfectly fine, (3) my concern about wanting to serve freshly brewed coffee to guests is moot since our building isn't even allowing guests at the moment with the pandemic situation still being kinda crappy. So really, there's no rush to buy it unless (A) it becomes crazy cheap somehow, (B) the Hanabishi machine bursts into flame or (C) the pandemic comes to a miraculous end and we resume our normal gaming-in-person lives. Then I'd totally buy it.
And that's all I have to say on the matter.
sietch life