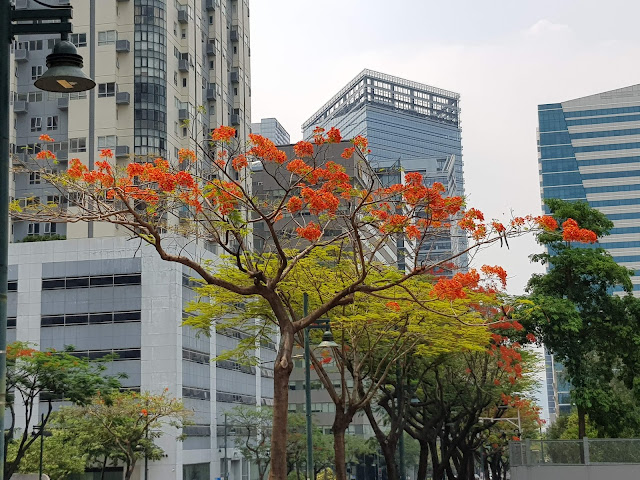 Metro Manila Community Quarantine - Day 438
While Tobie still had a (very) full workday to get through today, I had a work holiday because of Vesak Day in Singapore, and I got a fair amount of stuff done.
Here's my day:
1. Slept In - And while I still woke up a few times to my weekday alarms, I consciously tried to sleep in and actually left bed just before 10am instead of at 8am. Achievement!
2. Still Worked Out - even though it was a holiday, I still wanted to work out. But choosing to sleep in meant that I only had about 30 minutes for a workout instead of enough time for a circuit workout AND a yoga flow. Still, not bad.
3. Foot Spa - My main indulge for today was the fact that I had scheduled my first foot spa since before we reverted to ECQ. I had been repeatedly patronizing The Secret Lounge PH mainly because they're a smaller establishment that can only really support 1 customer at a time. So when I book a session, I'm typically the only customer in the entire establishment. I don't know if this is truly financially viable for the business, but I'm just glad not to share space with too many people.
4. Didn't Buy Slippers - My house slippers broke yesterday and I figured I had time to find a new one. My previous one came from Old Navy, but they didn't have the sort of slippers I wanted, so I figured I should skip it for now. I also swung by Bench to see if they had options, but this was actually the first time I had actually visited the High Street Branch and it felt surprisingly confusing to navigate for just slippers. So I went home.
5. Read Many Things - My main leisure goal today was to read and I think I did well here. Between my foot spa and all my walking around BGC, I finished a novel on my Kindle, an audiobook via the Audible app, and some comics once I got home. Yay me.
6. Still Got Some Work Done - I know it's a non-working holiday for us, but I still had to pinch-hit to help out with some work stuff. And I also invested some time to encode a few applicants that had come in via Kalibrr since I'm on leave tomorrow so I don't want to delay things further.
7. Met Up With a Friend - A friend surprised us by dropping by the condo after work. We were open to inviting him up to the unit briefly, but it turns out the condo never lifted the No Vistors order imposed at the start of ECQ this year. So we resorted to going to the nearby Coffee Project to talk a bit, albeit all of us sitting uncomfortably far apart from one another and still in face masks. It was still nice to see a friend in person again - that's such a rarity these days.
8. Online Vampire RPG Session - Most Wednesday nights are for our Vampire: The Masquerade games and we were confirmed to have one today. It was a lot of fun and we're really building up to a major climax for the entire campaign. It's very likely that we're going to explore what our next campaign is going to be since this story is bound to wrap up.
Tomorrow I won't be working (the whole day) since we have our DFA appointment to get our passports renewed. I'll still squeeze in a workout before we leave and I'm also sure Tobie and I will be checking on work regardless of what we should be actually doing, this being getting through the joys of government bureaucracy.
It's going to be weird to be at SM Megamall again, which is where we set our DFA appointments. We've barely left the BGC area since quarantine began, so venturing to another city always feels like an odd artifact of our ancient pre-pandemic past. I doubt we're going to stay too long beyond the minimum time needed for our passport renewal. That's still a massive closed space with centralized air conditioning and we know that tends to be quite the hotbed for things like COVID-19. Such fun.
books holidays QuaranGeeking work