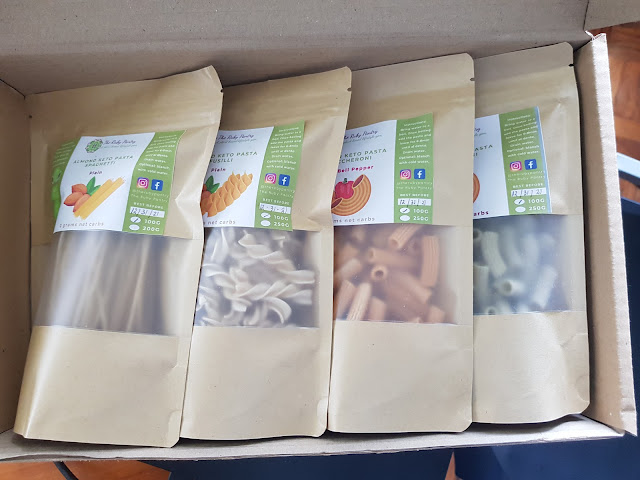 Metro Manila Community Quarantine - Day 427
As much as it's already a Saturday, I still found myself waking up after barely 6 hours of sleep because my body is kinda wired that way. It's just as well since I was expecting a delivery from a friend's keto business, Bougie Cravings, in my efforts to support local business while also experimenting with other keto-friendly options. My order today included their keto puto, a sampler box of different almond flour-based keto pasta, and some cacao tea, which really sounds intriguing. Thus far I've only been able to try the puto and it's really good. The texture is just right for puto and the use of coconut flour totally worked in this case. We'll probably try the tea tonight then figure out where to slot in the pasta this week.
I've been limiting myself to lighter workouts this week as this is my first week "back" after I took time off to rest because of muscle strain. I have the difficulty set to a lower level than usual to avoid risking injury again, but today was the first time I embraced one of the more intense 45-minute workouts that the app occasionally throws my way. Given a week of mostly yoga and shorter workouts of moderate-intensity, this was quite the jump and I was rather nervous about it.
But I eventually got around to doing it and it was kinda brutal as my body was complaining about the effort. I got through most of the sets though except for the final 1-minute set of mountain climbers and the last few sets of straight leg bicycles and alternating plank leg raises, but that's still better than nothing. I know I still need to build up my strength again and that will take some time, but I'll get there. At least I worked on it today.
Tomorrow I'll take it a little easier with an indoor jog and some restorative yoga, maybe.
We just wrapped up today's Night's Black Agents RPG session and it was quite the adventure. My agent character, "Karen", started in Germany, made her way to Vatican City, then had to escape from assailants unknown as I drove through Rome, lost my tail by going cross-country, only to end back in Germany. I'm looking forward to having her rejoin the rest of the team in order to share my findings. But there's just so much to do and so many possible lines of investigation for us to pursue.
The rest of the night is pretty open and so is tomorrow, so we'll see how things go. I might try to squeeze in some time to open up some Transformers and Tobie has his sights set on working on the new shelf, I think. We really need to create more space for all our board games another geeky collectibles hahaha
gaming gym life health keto life sietch life tabletop gaming