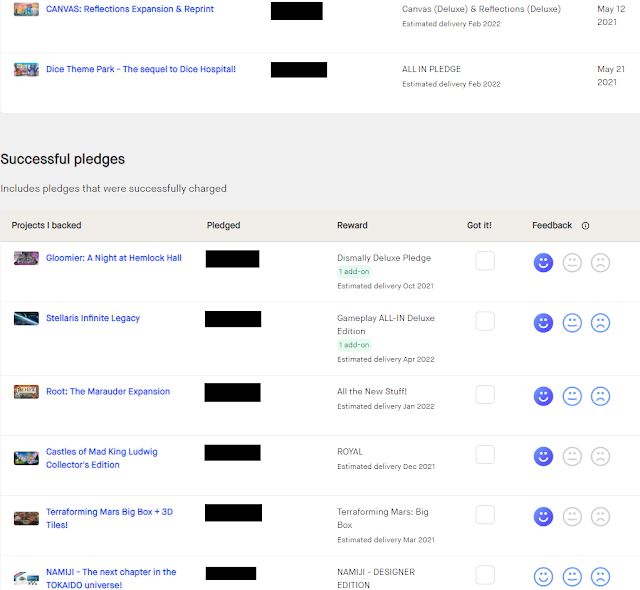 Metro Manila Community Quarantine - Day 423
We just backed the CANVAS: Reflections Expansion Kickstarter within its last 48 hours because (1) the game looks super pretty and (2) this is a great way to get the deluxe editions of both the original game and the new expansion. This is just the latest of different Kickstarter projects for board games that we've supported recently. And as much as most of the actual pledges have already been collected, they all have different production cycles before they reach completion/shipping.
So let's do a quick run-down of what's up in the air.
And separately Tobie is responsible for our support for the Robinson Crusoe - Collector's Edition crowdfunding effort, mainly because his game scenario is part of the Book Adventures, which is part of this project. And I almost forgot about how we sort of became late backers for Dinosaur World and Dinosaur Island Rawr & Write via a pre-order option that became available via local retailer Gaming Library. It still means we get the full Kickstarter edition even though I didn't jump on the original campaign.
The only "major" release from publishers that we generally support was for Aries Expedition: The Terraforming Mars Card Game because...Terraforming Mars is already a card-heavy game and I didn't see the point in a slightly simpler version of a game that we like precisely because it's so deep and intricate. Despite all the different projects we participate in, they're all legitimately games we'd still play. And this last one didn't feel like something we'd get behind just yet. Maybe if we ran across a secondhand copy of the game sometime in the future?
So yeah, we have fingers in many different tabletop game pies, as it were, and it'll be interesting to see how things go once they all arrive. Too many of the games that we love have been around long enough to justify having a collector's edition for them, which is bonkers. And yet most of them will arrive before we can actually arrange for a game night with friends because of this pandemic.
That's the part that sucks most of all.
gaming QuaranGeeking sietch life tabletop gaming Tobie