029AA: Getting Back to Normal 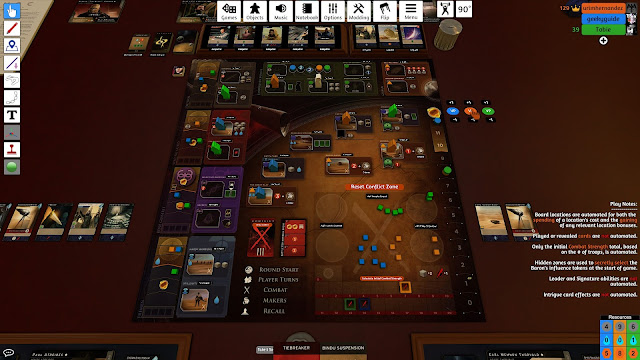 Metro Manila Community Quarantine - Day 414
Mixed feelings for the weekend - I guess Karen's passing still loomed over things. We had canceled last week's remaining Baduy Pride episodes after the news broke but still pushed through with one RPG session on Saturday. The rest of the time was spent playing online board games with our FGTC friends, but given the time playing digitally consumes, that just translated into one round of Terraforming Mars on Saturday night and a game of Carcassonne this afternoon. That was followed up by a game of Dune Imperium (via Tabletop Simulator) to cap things off.
We'll try to get back to our more regular routine this week and see how things go. I think it's safe to get back to streaming for Baduy Pride at the very least. We still need to confirm if we'll have a Vampire game this week. We don't have a game on Saturday, so that leaves our Ryuutama game on Sunday.
Board games are a little bittersweet at the moment given our main group is all still coping with the loss of our friend. And it's really a thing - playing still feels a little weird. It's still fun, don't get me wrong. But at the same time, there's a feeling that's something akin to guilt for playing without her or something like that? I can't quite put my finger on it. Or maybe she is with us and it's just us getting used to the new state of affairs in a different way.
There are more specific things that I'm not 100% ready for like I'm not quite ready to play Wingspan since Karen really liked that game - or at least its soundtrack. It was one of the last games that we played with her online during our last online board game night with her.
On the flip side, it has been nice to hear of other people celebrating her legacy. Many of the drag queens that we call friends, particularly the queens of AnTuTan Says, added special tributes to Karen as part of their live shows this week. And that was really special - so much so that I teared up a bit hearing them talk about how Karen really made them feel that she believed in them as artists. And that says a lot about the impact she's made on the people around her.
computer gaming deaths gaming queer life sietch life social networking tabletop gaming