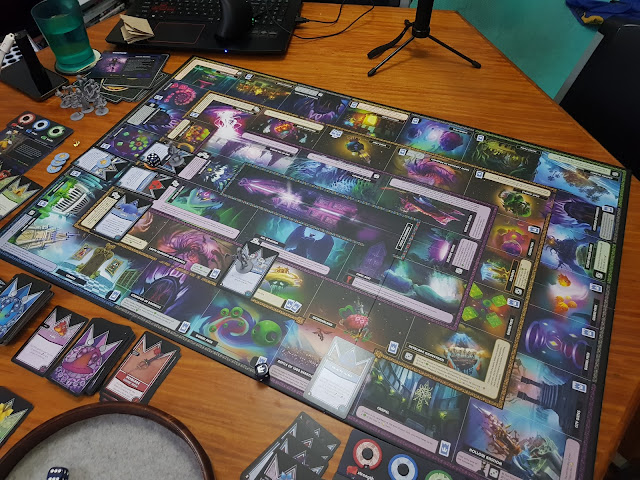 Metro Manila Community Quarantine - Day 406
Despite my madcap effort to watch as many Masterclass video lessons as we can before our subscription expires after Tobie's birthday, we still found time to finally try out our new copy of Talisman: Kingdom Hearts last night. I had very mixed feelings about this game since it was based on the older Talisman game, which can feel rather clunky when compared to more modern games out there.
But this particular game turned out to be pretty fun as it nicely embraced a lot of the quirks of the Kingdom Hearts video game franchise. Don't get me wrong - it still has some of the frustrations of the original Talisman game such as the fact that you'll be rolling dice a LOT and you'll be going back and forth around the board. But the tweaks to the board to better reflect the Kingdom Hearts games did add more flexibility in terms of how to cross between the different regions and to some degree they were also more generous with the amount of good stuff in the adventure deck. Throw in the fact that this game is more semi-cooperative and no longer has most of the more frustrating PVP aspects of the original game, and the end result is pretty cool.
On the subject of the current Masterclass binge, I'm toying with a few short story ideas that came to mind while going through Neil Gaiman's and N.K. Jemisen's courses on writing.
Obviously, I have a lot of pandemic story ideas floating around for now since I figure it's better to focus on what is familiar now and run with it. I really need to just try writing it and see how it goes but GAH, it still stresses me out to even think about fleshing things out. I need to get some short stories out just to grease the wheels again and get comfortable with things. I need to accept that I'm going to write a lot of crappy pieces before I get around to something that's more decent or legitimately interesting.
gaming sietch life tabletop gaming writing