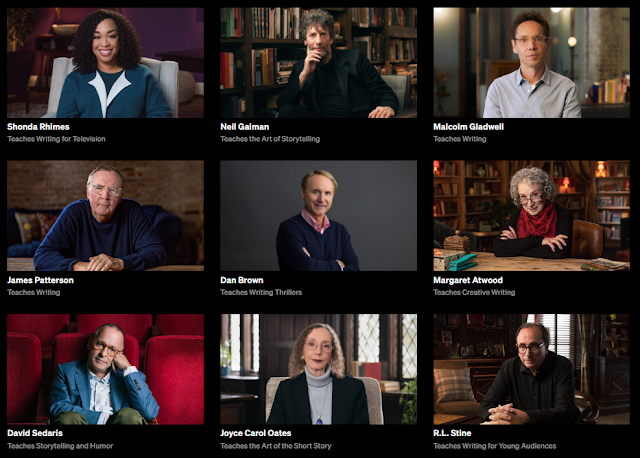 I initially signed up for Masterclass as a gift for Tobie's birthday. The big draw was that Neil Gaiman's class on The Art of Storytelling had just come out and it felt like for that alone it would be worth it. We'd make time to watch the classes together, but with so much digital content out there, there was a lot of competition. There were a few classes I'd listen to on my own like Anna Wintour's class on leadership and Tobie explored quite a number as well including Penn & Teller's class on magic and some of the other writing courses I wasn't too keen on like Dan Brown's class on Thrillers.

With Tobie's birthday right around the corner, this also means our subscription is up for renewal. And $180 is nothing to sneeze at for a library that we haven't fully utilized despite all the time we've had available to us. Plus, this is really meant as a class and not just a streaming platform and I don't think I've ever really dug into the course materials and the activities that come with the modules. But the videos alone are beautiful and inspiring and already worth the subscription.

But I am trying to optimize our steaming expenses as of late. I've just let our Amazon Prime Video subscription lapse for now since there just isn't enough content to justify the regular cost - I know I'll re-subscribe when the next season of The Expanse comes along. And Masterclass is sort of next on the chopping block. Still worth the price if you use it and I think we'll eventually come back as even more instructors are added to the library of courses.

I've mainly gone through a lot of the writing-related courses because of my own desires to get back into creative writing. And here we are at the end of our subscription and I still haven't written anything. But as we listen to Neil Gaiman's class together, I once again find myself nodding in agreement with more of the same writing advice that the likes of Margaret Atwood and Joyce Carol Oates have said in their own Masterclasses on writing.

I really need to write. There's no getting around it. I still fear that I don't really have a voice or a perspective or an identity as writer. I'm not at all sure what I want to say or what sort of a message I want to deliver. But given years of inactivity, I'm not going to figure that out by thinking about my writing. I may only find my voice by writing terrible things until I figure out how to write better things. Tobie has been trying to push me to do this time and time again. And maybe this is the best birthday gift that I can give him - to heed his advice, reward his faith and belief in me and write something worth the value he sees in me.mov