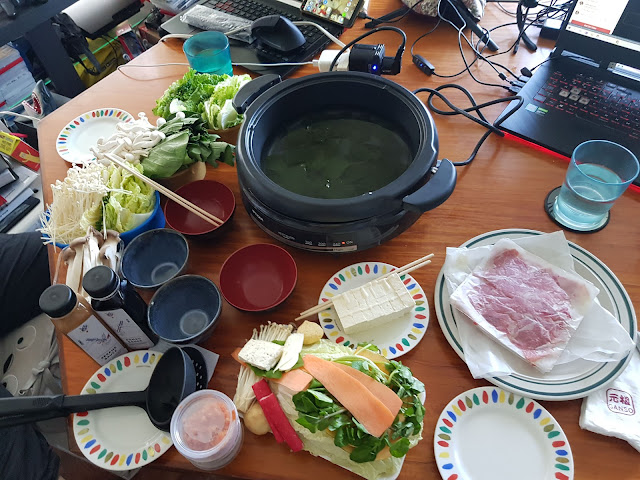 The other day we did a whole Baduy Pride episode about hot pot, and that led us to finally looking into the possibility of ordering a hot pot kit via delivery. I had seen this done a number of times by friends in Singapore, but for some reason had never considered looking for options here. It's just one of those eating experiences that you so associate with dining in and not something you'd have at home. But we do have that hotpot skillet that my sister had given me as a gift many years ago so it wasn't an impossibility.

By the end of that episode, we had confirmed that Ganso-Shabuway, the shabu-shabu restaurant that we used to eat at regularly after watching Repertory Philippines plays. Looking back at my photos, we had last eaten there on 1 March 2020 after catching Stage Kiss. Wow, I miss theater.

Anyway, figured it would be more practical to shift our first steamboat-at-home experiment for the weekend since we wouldn't be able to eat leisurely during the workweek. I had forgotten to set up the plans sooner but did manage to get everything confirmed early this morning - kudos to who I presume to be Regina from the restaurant crew, who started replying to my messages before 08:00am.

While we knew what we wanted to order, I just wasn't too clear on the process since their Facebook page stated that deliveries would be processed by messaging the individual branch's Viber account. But it wasn't so bad - one of those deals where they only accept payment via a bank account or GCash followed by the customer being responsible for arranging for a courier to pick up the Shabuway-to-go pack from their crew. I typically avoid this sort of thing since it stresses me out arranging for a Grab Express rider and not being able to coordinate the pick-up directly, but we have to make do with things.

Thankfully, the delivery made it to us safely and we supplemented the base package with a very generous amount of mushrooms, vegetables, and other good stuff. We even went on Facebook live to show off the spread and share the joy.

On the whole, it was quite the little indulgence but one that felt well-earned after all the stress of this week. Tobie remarked that it almost felt like we were on vacation given the humid weather and us just enjoying some good food. The decision to supplement with our own additional mushrooms and veggies was a prudent one and got us a lot more value for money. I was a little underwhelmed at the relatively simplicity of the soup base, and this just makes me want to consider assembling our own hot pot set up entirely next time and see what we can come up with.

Otherwise, we're taking it easy this Saturday after completing different errands this morning. I had parental resupply duties while Tobie handled our weekly grocery restock. We're hoping to play a few board games online with friends, and then after we'll be free to play other games like Planet Zoo or something.