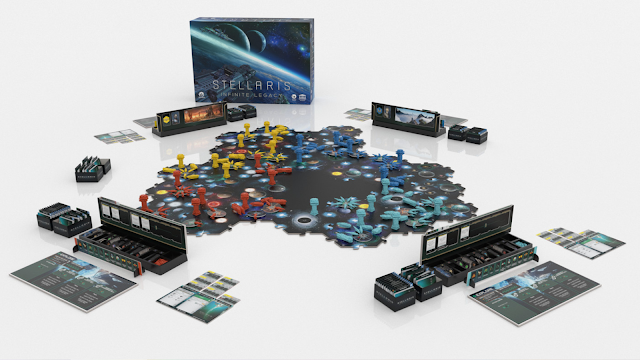 Metro Manila Community Quarantine - Day 387
One of the Kickstarters I'm most excited about is Stellaris Infinite Legacy, which is a legacy-style board game based on the popular 4x computer strategy game. I may not be the greatest at the computer game and I am rather daunted at this tabletop game adaptation, but it's still a fictional world I'm pretty excited for. And I appreciate a lot of the mechanics and tricks they've worked into the game in order to make this translation work.
On an abstract level, I'm excited about the game. On a practical level, I'm a little worried about whether or not I'll be any good at it or if we will be able to find other people interested in playing it because it's bound to be quite the investment of time. It's already advertising to be a "quick" 2-hour game, which is admittedly shorter than, well, an actual game of the Stellaris computer game. I also haven't been all that excited for games like Cosmic Encounter (which we own) nor have I finally taken the plunge to try something like Eclipse (which we don't own). But it's a space game! With so many ship miniatures! That's enough reason to be excited, right?
Otherwise, there's the crowdfunding effort for the Collector's Edition of Robinson's Crusoe. That's proving to be another generous collection of detailed miniature figures to enhance yet another board game. Oh man, are we becoming miniatures people?
These are the things that keep me smiling despite everything we end up reading in the news as of late. The numbers are still bad, people. The numbers are bad.
gaming QuaranGeeking tabletop gaming