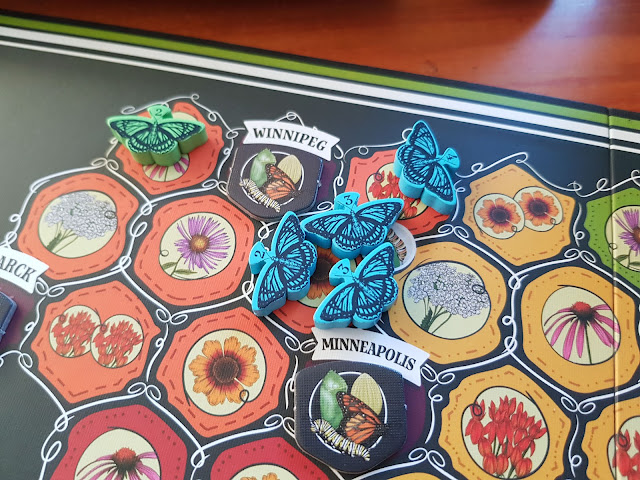 Metro Manila Community Quarantine - Day 384
It's rare that Tobie and I get to fully share a long weekend together and the addition of the ECQ declaration for NCR Plus this week also curtailed what few recreational activities were available before considering the Holy Week holidays. So the free time became tabletop gaming time for us.
We spent all night trying to figure out how to play Lisboa, because it's a Vital Lacerda game and those things are always pretty heavy. This is the same guy who gave us games like Kanban and The Gallerist after all, so that sets your expectations. But I have to admit that the game is indeed quite clever and it was pretty satisfying to figure out how the different systems interconnected and came together to create a unique gaming experience. I still feel that I won more out of luck than design but it was still good to end things on a win just as the sun was coming up.
Today's new gaming adventure was Mariposas, a game about the migration of monarch butterflies. It didn't quite feel like the Wingspan of butterfly games as it appeared to be at first, but that's okay. It's a pretty tight game that plays rather quickly but is tricky to master. There's a lot of randomness at work between the different action cards and other mechanics, but there's still enough freedom to chart one's own path.
We'll see what other games we can play after Baduy Pride tonight, but I definitely want to revisit game like Dune Imperium because why not, right?
I hope everyone else is having a good weekend.
gaming holidays QuaranGeeking sietch life tabletop gaming