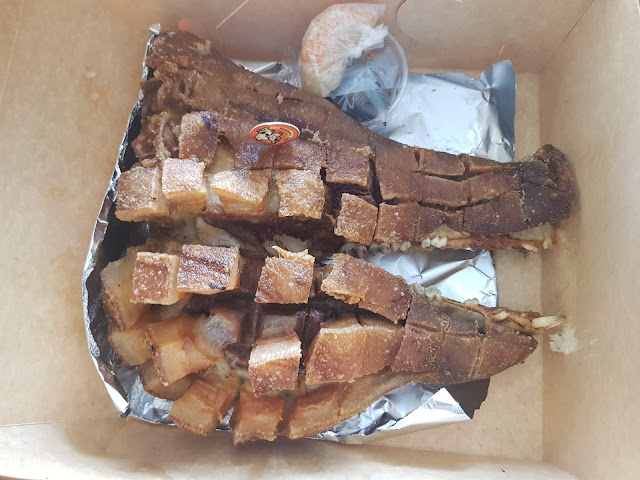 Metro Manila Community Quarantine - Day 382
Tobie had arranged for quite the surprise for lunch in the form of a Pepeton's Grill Kapalmuks - which is pretty much half pig's head that has been deep-fried in a manner similar to a crispy pata. I was rather surprised at how meaty this ended up being. It's more expensive than like a Max's Crispy Pata, but it also lasted longer (we only finished half), if that makes sense? And so it totally feels like a better deal, apart from the fact that we have these massive bones that we end up needing to deal with after.
Also, pig teeth are surprisingly (disturbingly?) human - now I know.
But still, we had been curious about his for some time and it was nice that Tobie found a way to get it over to us - despite the fact that all branches of the restaurant are all the way in QC. I was rather really surprised that he had managed and even more so by the fact that it was still quite crunchy upon arrival. I can best describe the experience as like eating lechon kawali, but still attached to a pig's head. And that was totally awesome.
Busy, busy day at work. Lots of different projects that I'm involved in and I find myself wearing quite a number of hats as a result. It's tricky keeping tabs on things but I think I still have things fairly under control. And tomorrow is still a workday for me with a lot on everyone's plate given the shortened week, so we'll see how that pans out.
I'm just happy we ate a pig face.
food adventures holidays sietch life Tobie work