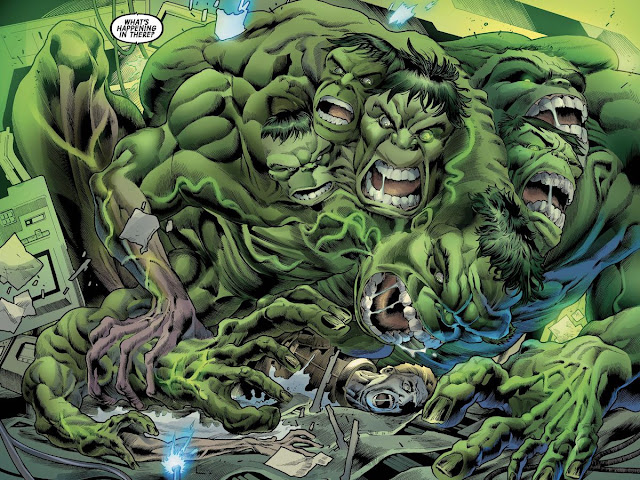 Metro Manila Community Quarantine - Day 375
I really should save content like this for the Geeky Guide or something, but that adds a bit more burden in terms of the level of writing it needs to be. So let's have this as a more casual discussion of my appreciation for the on-going Immortal Hulk series.
The different Hulk comics aren't what I would call my regular comic book fare. I started as a Spider-Man fan and have branched mostly into the cosmic-related stories of the Marvel universe like the Guardians of the Galaxy and such and eventually dabbled in some Iron Man, but not a lot. But the combination of a timely comiXology sale and a lot of good press about the Al Ewing run for The Immortal Hulk and I eventually dove off the deep end.
This book is...deep. It posits that Bruce Banner essentially has multiple personalities, as represented by the different incarnations of the Hulk over the years. And on top of that, there's also some new mythology of sorts about a Green Door, that all the gamma irritated see at the moment of their transformation and at other key points in their lives, particularly death. So it's more than just about being a radioactive product of science but also tapping into some other realm of sorts - something that connects all these different characters through gamma. And it's somehow the secret of the Hulk's immortality - and possibly the immortality of everyone who has been touched by gamma.
So we have Banner's complicated mental condition, an otherworldly power source, and all this is dressed up with the sort of visuals one would associate with a horror comic book (see above). There's a lot of green gore time and time again and the Hulk is seemingly killed every few issues only for him to come back. Even his transformations from human to Hulk are a lot more disturbing now, but it all adds something unique to the narrative. There are disturbing concepts and ideals that fuel the story and the visuals make things more real somehow, bringing things more in your face.
The comic does not shy away from how the Hulk is a literal monster and visually depicts him so. But he's not the ignorant, idiotic hulk either - he's fully capable of normal speech in his Hulk form now, which makes things even more disturbing. I may not like horror movies, but I love the chills I get from this comic.
But it's still not a horror comic either despite the visual styling - it's still somehow a superhero comic. Hulk is ultimately trying to do the right thing - it's just that everyone else is far too used to reacting out of fear because the Hulk is always going to be the biological equivalent of a weapon of mass destruction. And how he balances things as we learn more about what lies beyond the green door is what continues to make this title so fascinating.
So if you're up for a rather cerebral yet disturbing read, then this is totally the book for you.
books comics QuaranGeeking