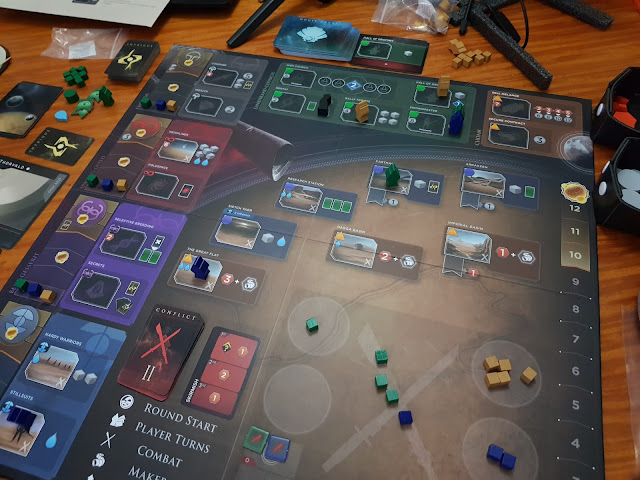 Metro Manila Community Quarantine - Day 348
Wowzers, today was super busy at work. I was initially hoping that things would be light enough that I could just take the holiday off instead. But the morning began with one of our clients asking for an urgent report before lunchtime, and that pretty much set the pace of things. There's always going to be more proposals to work on after all. And today included other fun things like stupid changes to the Lazada Sponsored Search platform that made it impossible to efficiently extract the data I needed for my reports and other conundrums of the digital marketing world. But at least I made it to the end without crossing that dangerous line of fully developing carpal tunnel syndrome just yet.
I strongly suspect that tomorrow will end up being less busy than today was, just for maximum irony or something.
But I am glad that Tobie and I got to try out Dune Imperium last night. I had managed to finish my dailies pretty early and we skipped recording a Baduy Pride episode in favor of trying out the game. The mechanics are relatively easier than Gale Force Nine's re-release of the classic 1979 board game but there's still a lot of depth and interesting interconnected pieces that make things very interesting. It's a worker placement game with some serious constraints that can either be frustrating or inspiring and I know that we're going to continue to experiment with it and see how far we can push the game over time. The spice must flow after all.
One more day in this work week, and then it'll be time for the weekend. We could all totally use a break by now.
gaming holidays QuaranGeeking sietch life tabletop gaming work