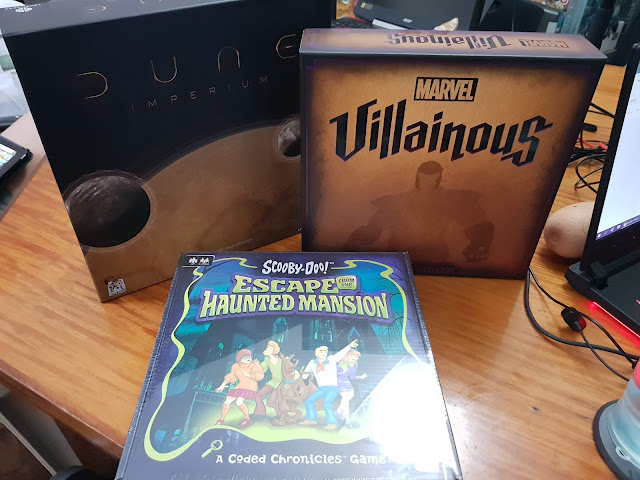 Metro Manila Community Quarantine - Day 347
Despite how busy things have been for both of us, somehow Tobie managed to get his hands on new copies of Dune Imperium, Marvel Villainous and Scooby-Doo Escape from the Haunter Mansion AND secured delivery.
I've been cautiously interested in the first game because it's a Dune game, even if we still have the Gale Force Nine re-release of the classic Dune board game already in our collection. The Marvel version of the Villainous game has been a promising reimplementation of the already beloved Villainous game in our collection and we had largely been holding out for a good deal for the game as it's a fairly new release.
The Scooby-Doo game totally caught me by surprise since I had never heard of it before and initially thought it was some reimplementation of something like Betrayal on the House on the Hill. It turns out that it's an escape room-style game, which totally works given our love for the likes of Exit, Unlock and most recently Escape Tales. So yeah, this is totally going to work.
The new games are certainly a pleasant surprise and I think we'll try to squeeze in time to try them tonight instead of going live for a Baduy Pride episode. We typically don't have episodes on Wednesday nights in favor of our online Vampire: The Masquerade RPG sessions, but real-life obligations for some of the players have made gaming tonight an impossibility. And I think after how busy things have been, we might as well play a few rounds.
I don't have the holiday tomorrow but Tobie does, which is a shame. I considered taking the day off but there's still a fair number of things that need to get addressed, so it feels more prudent to log in for work - we're all working from home anyway.
gaming sietch life tabletop gaming Tobie