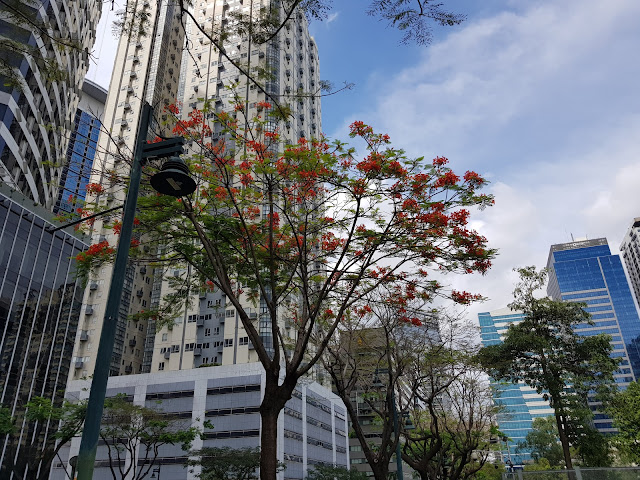 Metro Manila Community Quarantine - Day 343
Great workout this morning - pushed hard through one of the 45-minute circuit routines that the Nike Training Club app throws my way. As much as I work out nearly every day, I'll admit that often rearrange the workouts to defer the more intense stuff when I'm not feeling up to it. So today I figured I had all the time to try to get through and not make more excuses. At this point, I'm pretty familiar with all the routines that the app tends to cycle for me, but this doesn't make things any easier. I still had to take extra breaks between some of the sets, but ultimately I got through things in the end.
I was totally feeling it, so I took some post-workout documentation photos and enjoyed the results. And I even took another shirtless photo before stepping out because why not, right?
Since Tobie was still with his mom this morning, I stepped out for errands on my own and then tried to walk around BGC a bit. The cooler weather is totally perfect walking weather, admittedly and I just felt like I needed to get out more. Initially, I was thinking I could do a full circuit of High Street or something after picking up some keto supplies. But hunger got the better of me as my fasting window ended while I was still out, so I just took a slightly longer route home. Plus seeing some of the crowds of people queued at different establishments just stressed me out and had me thinking that High Street would probably have even more people milling around.
Tobie arrived home a little earlier than expected but just in time for our Night's Black Agents RPG session for the day. I was really excited for this session since our last game had been back in January and it was nice to get back into this story world of spies and possible vampire agents. We're all quite early in the investigation but today's session did give us new leads and new things to explore.
Now chilling with the Kweeens Noight drag queens while catching up on our respective computer stuff. I still want to see if I can finish work on the Dracula Dossier, but we may end up just playing a board game or computer games.
Saturdays are for chill stuff.
gaming gym life health queer life sietch life tabletop gaming