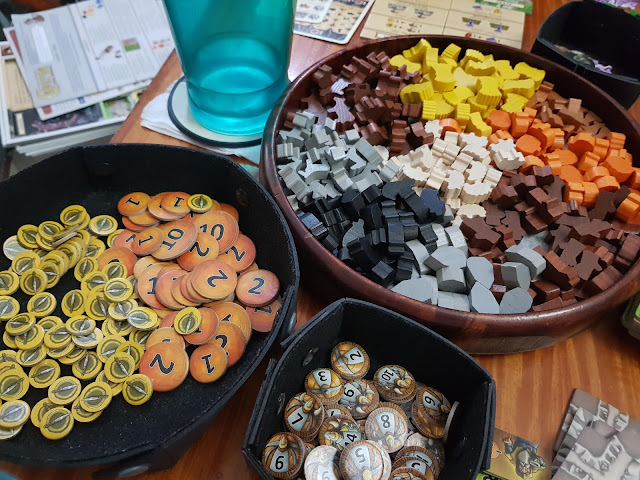 Metro Manila Community Quarantine - Day 336
Last night, we finally got to game in-person again with Urim. Pre-pandemic, a month wouldn't go by that we didn't have multiple game nights with him whether for board games or tabletop RPGs. And while we continue to game with him online, it's never quite the same. Plus a lot of the games that we really like - especially those with numerous expansions - don't always have good digital adaptations.
Thankfully the CNY holiday became a good opportunity to meet up again safely and we knew that we were going to play a lot of the heavier games. As much and Tobie and I enjoy introducing new friends to the tabletop gaming hobby on a regular basis, that means focusing on easier to appreciate games versus the heavier, more complicated stuff. But gaming with friends who are already deep into the hobby like we are means taking the kid gloves off. And we've been eager to try out some of the new games that we've acquired over the course of the pandemic and extra expansions that also help change initially familiar gaming experiences.
Funnily, we started and ended the game session with different games by the same designer - in this case, Uwe Rosenberg. That man really loves his animal-themed figures, and this was clearly demonstrated with the two games we played - New York Zoo and Caverna. All the other games we played throughout the night were like the greatest hits of our favorite Euro-style games. We finally played Terraforming Mars with ALL expansions including the latest Turmoil expansion. We played the new version of Pret-a-Porter because of course the fashion industry makes for some cutthroat gameplay. And we even threw in a session of Villainous with the new expansion.
Needless to say, it was a great game night, and as the sun began to rise in the morning our brains were pretty worn out because of the need to think through all those strategic plays, but we were all very happy with the overall experience. And that's really the best thing about the tabletop gaming hobby - the great mix of challenge and camaraderie.
And we have a few other gaming "dates" set for this weekend, which makes for a fun way to spend this combined Chinese New Year and Valentine's Day weekend. Hope you're all having a great time as well.
gaming holidays sietch life tabletop gaming