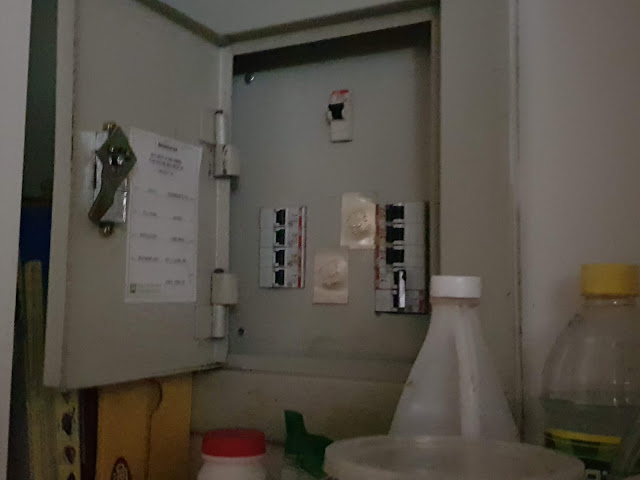 Metro Manila Community Quarantine - Day 330
Today started out normal enough. After a long night of geekery and finally watching the amazing 1917, we woke up to a nice lazy Sunday vibe and we were very much looking forward to our Pendragon RPG session in the afternoon. Tobie had marinated a chicken that we were going to roast for lunch and I had enough time for a nice restorative yoga workout before breaking our fasts.
And right after the chicken had finished cooking and we were about to eat, the power went out.
Power outages have largely become a rarity in recent years, more so since we move to BGC. And we figured that things would get resolved pretty quickly since our last power outages barely lasted an hour. Initially, it just felt like an inconvenience and we figured that we'd just be a little late for our game and that was that. At the very least, our condo provides "convenience outlets" that allow us to have some lights and a fan running while waiting for the power to come back.
Since mobile data was being crap, we at least managed to use the time to finally get started on Killing Eve as Tobie had downloaded several episodes already. Getting started on this show is the true highlight of the day.
As the power outage started to go on for hours, we certainly got more and more concerned. I had a load of laundry in the machine when the power went out and I didn't know what was going to happen to it. Without power, we wouldn't be able to cook so we definitely had to figure out delivery options for dinner. I wasn't even sure if the elevators were running, but of course, they'd operational thanks to the generators that the building maintains. It was a small blessing that my weekly batch of keto pandesal hadn't been in the oven when the power went out as that would leave me with a baking problem.
Eventually, I at least prepared my keto pandesal mix since I had already melted some butter for it. I figured I'd get around to baking it once the power came back or maybe just defer it to tomorrow. the lack of power was runinig all my routines including our second cups of brewed coffee for the day and overall things were very...unsettling.
So we ran an extension to get the coffee brewed and then I switched that over to our DSL modem so we could restore proper internet. We abused the convenience outlet and got ourselves online and still ran a shortened RPG session with friends and had a decent evening despite the lack of power. And we still managed to have a nice dinner after the game and finished washing the dishes right before the power come back just before 10:00pm.
What a weird day. And we still have no idea why the power went out. Hopefully, the building administration will have a proper explanation from Meralco by tomorrow, at least for our peace of mind.
gaming sietch life tabletop gaming television