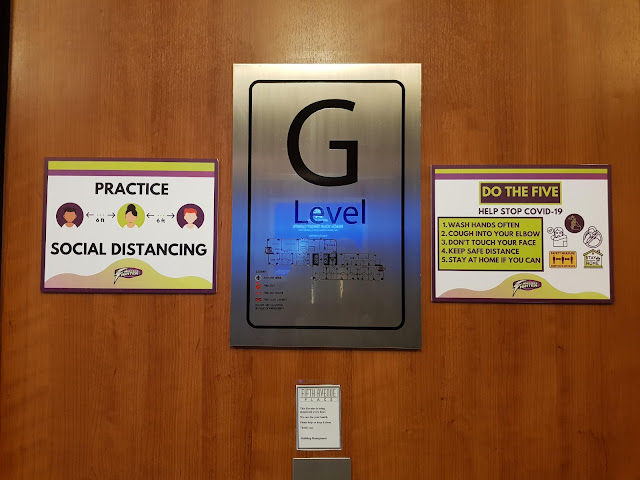 Metro Manila Community Quarantine - Day 315
Tobie and I actually left the Sietch today for non-priority reasons. While I did need to do my bi-weekly keto resupply at Real Food, I asked Tobie if he wanted to join me so (1) he could get more walking in and (2) we could swing by High Street for things like Fully Booked and such. We didn't have much time since we had a Night's Black Agents game scheduled for the afternoon, but we figured it would be a full little excursion, despite the need for multiple layers of personal protective gear to minimize the risks of infection.
It was a healthy walk from the Sietch to High Street and it was kinda weird to do so without just rushing back home. I realized that I hadn't been back to the main Fully Booked here in BGC for almost a year. Browsing still felt more rushed than I would have liked but it's hard to linger when you see other people around. I didn't find the Steven Universe book I was looking for, but we did pick up a cool Good Omens TV book that was like 50% off.
While we were walking around Fully Booked, I actually got a Viber message from Old Navy about an ongoing clearance sale for the weekend. As much as I had repeatedly argued that buying new clothes didn't make sense until we'd be going out regularly again, but we figured it couldn't hurt to look. We resisted most of the regular-priced items and ended up finding some fun Marvel shits in the clearance bin AND realized that both Tobie and I could fit into matching Small size shirts instead of the prior size of Medium. I also got two more shorts for my workouts, one of which was a clearance item, and the other was still cheaper than the other regular items out there.
I know Old Navy sizes are more American sizes, but I'll take the win for what it is. I'm finally a Small somewhere! I don't think I've been a Small size anything since like my grade school days.
We capped things off with a quick Salad Stop! run, which is another thing that I haven't done in a way. I usually customize a salad in order to stick to my keto needs but the available ingredients were a little sad versus, well, last year. But it was better than nothing and it made sure we didn't just end up at our much-beloved Sariwon -especially since we just ordered from them last night and I expect we'll have Sariwon again for lunch tomorrow.
Good times. And while it was nice to be out, it's still annoying to see people not wearing their masks properly or leaving their face shields up like visors and clustering in groups because social distancing is a distant dream for many, it seems.
BGC continues to change though. Fully Booked alone was weird since they had closed off the top floor, moved the comics to the 2nd floor beside the kiddie books, and the Starbucks inside the store was gone. At the same time, there were some surprising new places that had opened sometime in the past few months, which is not something you expect during a pandemic.