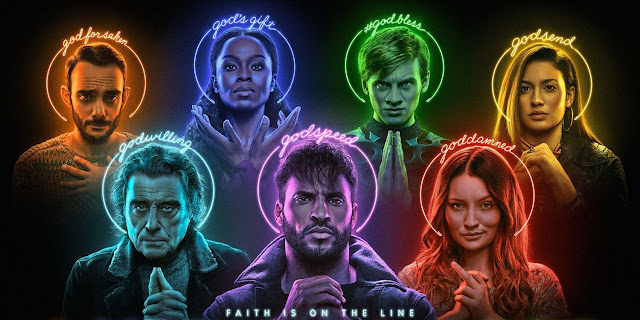 Metro Manila Community Quarantine - Day 304
The first episode of the latest season of American Gods his Prime Video today and we're going through it as I write this blog. The first season was all sorts of amazing but then the second season started to go in strange directions. For this third season, I'm trying to keep an open mind in order to better appreciate it as a show separate from the source material it was based on. I mostly do this for adaptations, but the first season had given me a lot of hope for a story that was more faithful to the book.
The second season totally dashed those hopes and the combination of many notable actors leaving the show along with so many narrative changes from the book, and we were left with a season that felt like so much filler material.
But let's move past all that and embrace American Gods as an independent television experience in the hopes of this going to somewhere more interesting. Plus this season marks the story finally going to Lakeside after meandering around this part of the story for so long. And book readers know that Lakeside is one of the most interesting "diversions" in the book and this has the potential to be kinda amazing.
Was surprised to see Dominique Jackson in this season as the new incarnation of Ms. World. It's hard to shake off her character from Pose, but we'll have to try our best to embrace her new role. But given how awesome she is as an actress, I have to admit I'm still excited to see where she'll take the character.
Incidentally, Bruce Langley is really growing into his role as Technical Boy and I think I may actually like him more this season. But of course, we've only seen him in one episode so who knows how things will shift later on.
So maybe we'll have a lot of interesting things to look forward to in this season. Some of them will be from the book. But I will assume most of them won't because that's just easier to handle.
television