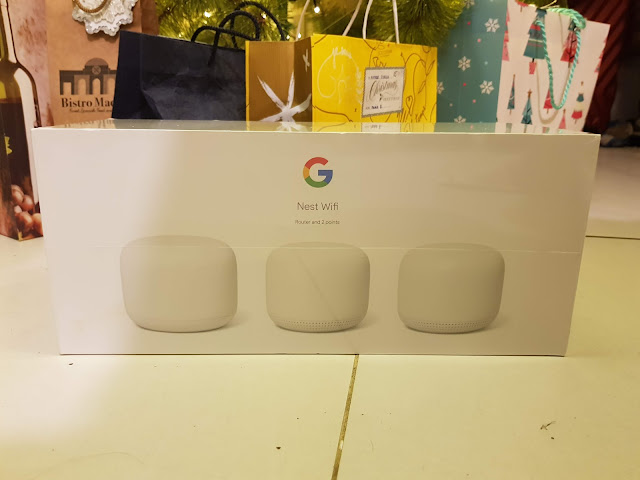 Metro Manila Community Quarantine - Day 285
People who have been watching recent episodes of the Baduy Pride vlog would know that I often feel that giving Christmas gifts can feel a bit like a competitive sport. And within the family, I seem to be more known for giving complicated gifts that need a bit of explanation and don't make sense right out of the box.
This year I got the family a Google Nest WiFi 3-pack to improve the internet quality in their condo. They had already set up a 5G router, but it still didn't resolve network connectivity in some of the rooms, so the gift made sense in my head. Plus the new Nest WiFi acts as both a mesh WiFi network AND Google Assistant smart speakers. So I got the weird generic "wow" response from my parents when I presented them the gift then immediately offered to set it up for them.
Between my boxing working this morning and the excitement of going from room to room to set up the WiFi AND THEN configure their individual Google Home accounts so the speakers will be able to distinguish their voices from one another. This last bit was kind of essential, otherwise, it would default to loading my connected Netflix and Spotify services, which will totally mess things up for me haha.
So I managed to get that resolved before starting on dinner, which may not have been a smart idea since I ended up eating faster than I should have and felt overly full after. But at least we managed to navigate the complexities of modern networking coupled with testing to ensure that Google didn't mix people up. The main goal of fixing the internet in the bedroom so Mom has an easier time watching shows on her Chromecast-enabled TV. The proliferation of additional Google Assistant-enabled devices around their unit is a helpful little bonus that I feel Dad may play with more. 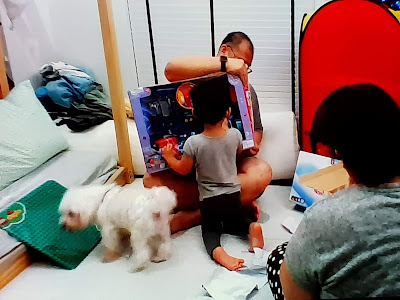 The true highlight of the evening was watching my sister's family via Facebook Messenger since they had prepared gifts for young Mason. They had gotten him a toy cooking set (since he really likes playing with cooking implements already), a bigger inflatable pool, and an adorable little drum set. Throw in the 50 Duplo-compatible animals I had ordered via Lazada Singapore and the official Duplo base plate his parents had gotten for him and the kid was overwhelmed with no idea which of his gifts to focus on playing with first. This resulted in some rather frenetic running around to beat on the drums, pretend to cook things, then parade the Duplo horses around.
Needless to say, his batteries eventually ran out and it wasn't long before they had to say goodbye as the little boy needed to get some sleep.
So now I'm relaxing at home at the Sietch again and really looking forward to sleeping early. Tobie is off with his family for their  Christmas celebrations this year, but I'm more than tuckered out not to feel too bad about him being away. Sleep will come soon, I'm sure.
Merry Christmas, everyone! Have a great holiday.
family holidays sietch life Tobie