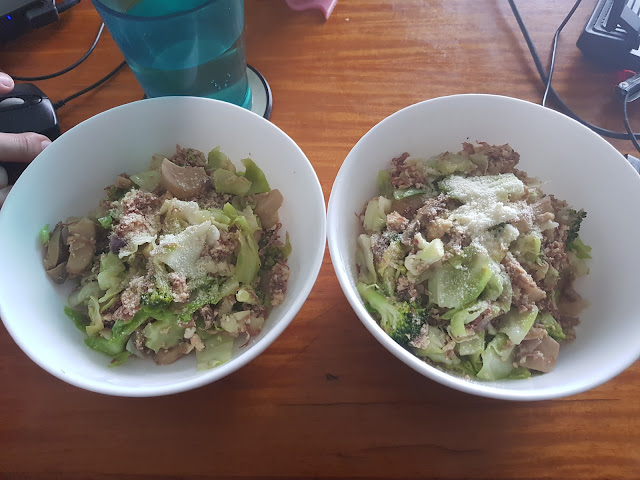 Metro Manila Community Quarantine - Day 271
Using food photos as my blog headers is a super random practice, I know. But it also speaks to what photos I typically take from day-to-day. I'm not going to use my gym selfies (or selfies in general) because, of course, I won't. So I end up with the stuff I take on a regular basis. And I'm still in the habit of documenting most of what we eat - or at least the dishes that we cook. And this is despite the fact that it's pretty much the same dishes over and over again, week after week after week. Thankfully Tobie hasn't gotten sick of my different keto-compliant veggie stir-fry concoctions and other repeated dishes.
One of the more memorable "events" from today was Facebook Messenger (and along with it Instagram Direct) going down for a significant period of time. This was particularly annoying since it we've reached that point where Messenger is our default channel for talking to our parents in our little "family chat" (as is the case for many others, I'm sure. We ended up arranging a quick video call on Viber instead, which still felt a little weird for us since we're really more Messenger/WhatsApp people given my sister being in Singapore.
The timing of this felt a little too convenient to tie into things like the US antitrust suit being brought against Facebook precisely because its interconnected services are starting to feel like a monopoly to regulators. And a day when Messenger drags Instagram Direct down, this affecting users all over the world becomes a great example of the problems of everything being under the Facebook umbrella. And weren't they also working on creating a fully integrated chat solution across their products that will also include WhatsApp or something? We'll see how this antitrust case progresses.
Terrible weather today. Some rain, but mostly a lot of muggy humidity. And I've been trying to limit our AC use to when we broadcast for Baduy Pride every night except for particularly sunny mornings. But case in point, I still haven't turned off the AC after the show because it's SO much more comfortable this way.
This post is so random because really, most of my thoughts have been focused on work but I don't want to talk about work because that's just not proper. So instead, we end up with blog posts like this where I just try to write down the different things that my brain has been bouncing around.
cooking food adventures inner ramblings keto life QuaranGeeking sietch life stop the presses work