02918: Coming From the Neighborhood 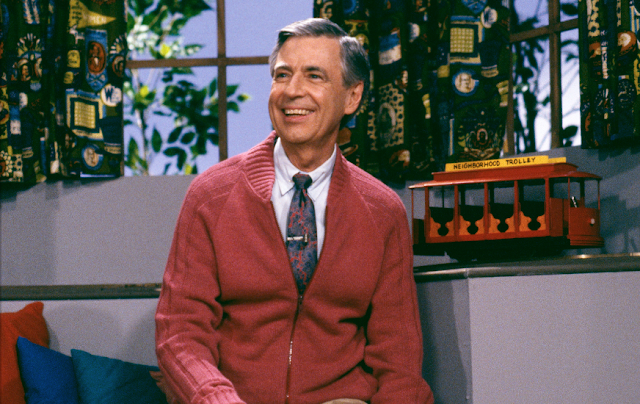 Metro Manila Community Quarantine - Day 268
Today Tobie and I finally got to watch Won't You Be My Neighbor? - a documentary about the life of Fred Rogers, better known as the creative force behind Mr. Rogers' Neighborhood. This is different from the movie A Beautiful Day in the Neighborhood, which is a biographical movie that cast Tom Hanks as Mr. Rogers.
Our family spent a few years in the US  and it was just the right time for me to be able to catch the show on PBS. And I have to admit, I fell in love with the show. I must have been 3-4 years old when I seriously started watching and what I loved most was when Trolley would take us to the land of Make-Believe. Beyond Trolley itself (because that train was totally a character, too), I remember being most fascinated by the Museum-Go-Round and it felt like such a rarity when they would make it spin around.
I can't fully explain how this soft-spoken man was able to warm his way into my heart and totally occupy my time for half an hour at a time when more exciting shows would also play on Saturday mornings. But I really did love the show and found it fascinating how he'd have inside shoes and outside shoes and all the little adventures he'd take us on from the comfort of his home. As a kid who rarely played outside (or at least never beyond our yard), I could totally buy into the idea of exploring a make-believe world or even just exploring different parts of the house (even though we didn't have an aquarium like he did).
It is only in hindsight that I better appreciate the power of this man and his message. Day in and day out, he tried to teach kids the power of kindness but also how it's okay to make mistakes and the fact that we are all special in our own way. I don't know if we'll ever see a man like Mr. Rogers find himself in a position to touch so many lives ever again - his kindness and strength of spirit now feels like something almost alien given the way modern discourse flows and the things that kids get involved in even at an early age.
Thus it truly was a gift that I and many of kids of several generations got to follow the camera as it panned over a miniature town to join Mr. Rogers for another delightful day together without ever leaving our living room. I'd like to think he helped to make us all better people somehow.
inner ramblings moving pictures television