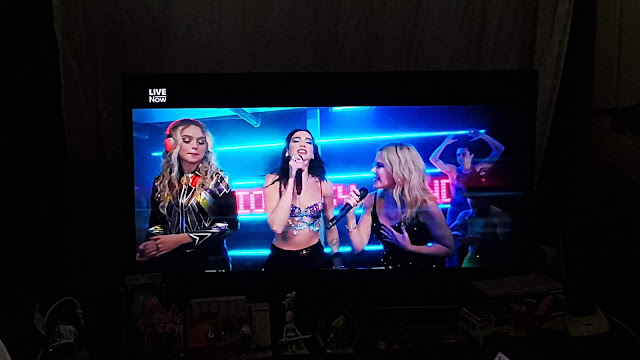 Metro Manila Community Quarantine - Day 259
After the joy of Kylie Minogue's Infinite Disco event earlier this month, it became an easy enough decision to sign up for Dua Lipa's similar Studio 2054 live stream event, but mainly because Kylie had been confirmed as a special guest. We figured that we had enough of an appreciation for Dua Lipa to pay to catch the performance just to get to the Kylie number.
The event was very different from what Kylie did with a more involved set with different "rooms" and sections that made up her virtual Studio 2054 space - the night club that all the viewers got to share for the duration of the 1-hour concert. She was recorded singing live and performed with a variety of skilled backup dancers and other guests apart from Kylie. The many aspects of the set including a tunnel of rings and thus gaudy-luxe dressing room made the whole thing feel like an extended music video with Dua Lipa dance-walking to the different areas for each song.
Seriously, there was a LOT of rhythmic walking.
Kylie's performance felt rather special since she performed one of her own new songs (and one of our favorites), "Real Groove", and then still provided limited backup for Dua Lipa's next song before she disappeared into the crowd. And while we can make fun of the fact that the lyrics of "Real Groove" include a reference to someone having the perfect body but not the moves with Dua Lipa nearby felt like an inside joke for old criticism in years past. If anything, Dua Lipa really made sure to show that she's become more of a dancer after a lot of practice and had some pretty dynamic numbers during the live stream event.
We obviously enjoyed Kylie's Infinite Disco more than Studio 2054 just based on the concept and execution, but this was still a lot of fun. And it really made us miss dancing at O Bar just like what the Studio 2054 dancers got to do in that colorful space.
all the world's a stage inner ramblings O Bar QuaranGeeking