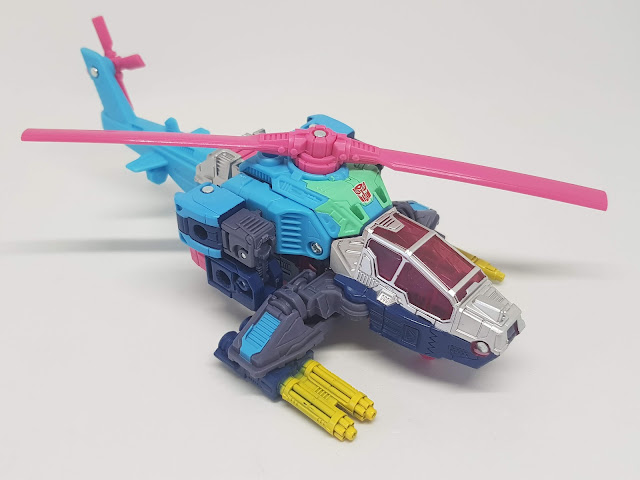 Over the weekend, I finally got to move through some of my Transformers unboxing queue and took the time to document a number of my more recent acquisitions from the past quarter or so. And a number of them were collector-targeted figures of obscure characters and the like.

Now when you go back to the original 1984 line of the Transformers, the pattern of repainting an existing character mold in different colors to create new characters was firmly established with the likes of the Seekers Starscream, Thundercracker, and Skywarp. Over the years we also get minor retools that change the head in addition to repainting the figure and some more complex retools that involve more than just a head.

A lot of collectors complain about this practice and how get the same toy but in different colors. But really that's just part of the mythos and we have to accept that once you get one Decepticon jet, you're going to get at least 2 more to complete the set. Every Soundwave will most likely result in a Soundblaster black variant. And now're getting more obscure characters like how Jazz can result in Stepper or Swoop ended up generating...Red Swoop? It's crazy.

Take for example the feature photo of this blog - that neon-colored monstrosity is the obscure character Rotorstorm who once was his own mold but is now a repainted Spinister with a new head. And as silly as it is...I like supporting these rare characters being brought to life anew. Sometimes they're Japanese variants. Sometimes they're homages of the original Diaclone figures. Other times they're used to be completely different characters and now they just extensively retool an existing figure as a cost-saving measure that still yields a new character.

If I were more budget-constrained, then I'd probably focus more on characters of greater personal importance to me. But while I can afford to do so (and the Sietch can still somehow hold all of our collectibles) then I'll keep indulging the creator fantasies of all these variations of existing toy designs.