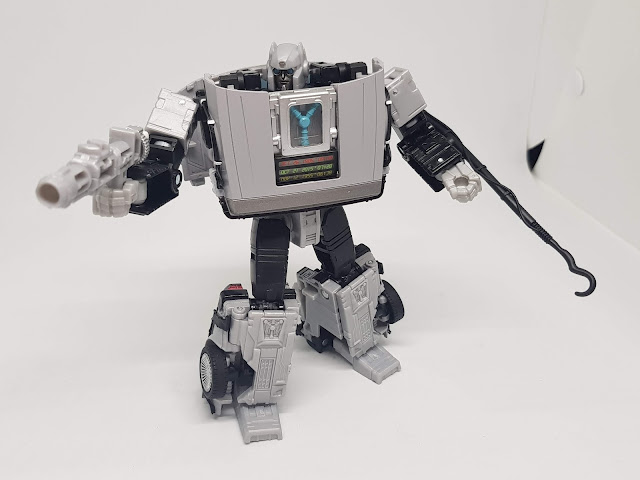 Metro Manila Community Quarantine - Day 245
Spent some quality time with my Transformers this afternoon. It has been a while since I had last unboxed some figures and the queue has built up a bit. But in order to make more space, dispose of more of the boxes and all that fun stuff, it's really better to get them out of their packaging.
The process is somewhat a bit more complicated than it needs to be, but it's a rather calming routine in itself. First, I need to set up the portable lightbox we purchased from Lazada. I use the white background for Transformers and the black background for Star Trek ships. Then I take photos of the figure still in its packaging, open it up, and go through the first transformation, documenting the different steps of the process with photos.
The bigger challenge after the photo session is figuring out where to put them. Some go on display. Others join similar figures from the same line in the appropriate storage box. Others kind of linger on the dining table when I want to play with them a bit more. But everyone gets a home eventually.
Then I have to get the photos uploaded and sorted into albums. I also upload headshots to my Transformers Acquisitions album on Facebook to catalog the figures I've purchased this year. At times I also take the time to create collages to post on Instagram for quicker sharing with a somewhat wider reach.
I have to admit, I don't get to play with my figures as much as I'd like to. The collection has gotten way too big for me to set up dioramas on a regular basis. But at the very least I have these photo albums and other digital keepsakes to look at fondly. I do love my collection, even if my way is a little unusual for some. Plus excessive transforming can totally ruin a figure or result in accidental breakage. I've killed a number of toys that way, so I've really learned my lesson.
I'm not exactly a great photographer, but I like the photos I take. I could be more ambitious with the sort of poses I position them and maybe I'll build up to that in time. Some figures are exciting to pose. Others you know will become balancing problems no matter how well you maneuver things.
Such is the life of a hobby collector.
picture picture sietch life toys Transformers