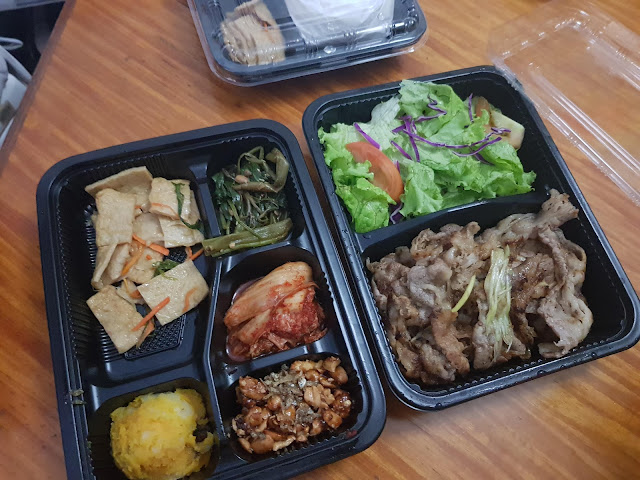 Metro Manila Community Quarantine - Day 235
My workday started earlier than usual because of a client call, and that just had me at my computer bright and early. I did get a fair number of things done, so that's fine. But I do feel a bit more mentally tired for some reason, even if it wasn't exactly that much earlier. Or maybe because it wasn't just a client call and it was in fact product training, so my brain was in full learning mode and not just checking email mode as would be more normal for that time of the day.
But it's the halfway mark, so we're closer to the weekend now than we were this morning. And I say this as someone who still had to work on Monday, so go figure.
I'm a little heavier this week based on my daily weigh-ins, so that's a little frustrating. But I'm also not quite up to the longe 45-minute routines when they come along, but I'm still keeping active. I've crossed back into the 4-week Bodyweight Only workout plan after finishing yet another 6-week Lean Fit workout plan. This has been my cycle since I started working out right before the lockdowns hit. They tend to play with similar sets of workouts, especially at this level of difficulty that I'm maintaining for now. But helps keep me active and all that.
The weather is being a little shaky this week. I know the next typhoon or whatever is going to travel along the Luzon Strait, so that's pretty far north. More often than not it has been overcast today with some rains but nothing too crazy. I figure the likelihood of rain will still increase with the storm system moving through the country, but I don't think it'll lead to an overly gloomy weekend. Only time will tell.
We've run out of Forensic Files episodes to watch on Netflix, which is kinda sad. The show was quite the guilty pleasure and good passive watching during work hours. Now we're exploring The Innocence Files, which is not as forensically fulfilling but it's something. There are so many real crime dramas on that streaming platform for some reason. But hey, I guess it works for us since we do enjoy them from time to time.
Apart from that, we're finally watching the new Twilight Zone. The stories have potential from time to time but they don't often quite stick the landing. It's like they end up with good ideas that are a little too big for a TV episode and might have been better as movies or something. But because the build-up doesn't get a pay-off at the end, then a lot of them feel somehow flat or hollow. But maybe that's just me.
gym life health inner ramblings stop the presses television work