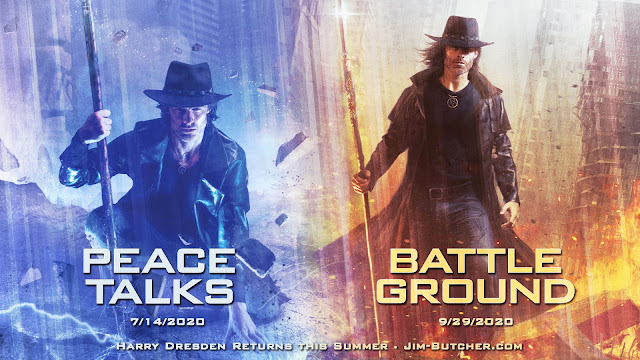 Metro Manila Community Quarantine - Day 215
Potential Spoilers for The Dresden Files Novels Ahead
So I just finished reading Battle Ground, the 17th novel in The Dresden Files novel series. And it was AMAZING. You can read my Goodreads review over here, but admittedly it's a little gushy because the book did leave me feeling rather giddy. Together with Peace Talks, it's essentially a duology within the larger arc of the books given the events of the two titles happen one after the other, but each book still quite solidly stands alone rather well.
Jim Butcher is an amazing writer because he has really firmed up who Harry Dresden is over the course of writing these different novels. And this is critical for a series of books written from the first-person perspective. We experience these stories through Harry's eyes and the consistency of his internal voice is a big part of what defines the series as a whole. And while I can say that most of his characters are equally well-developed, it's ultimately how well he has crafted Harry Dresden that has made this series what it is.
What I also love about the way that he describes the different concepts of magic in Dresden's reality. He doesn't make up a lot of words as many other fantasy books do nor does he bring in complex polysyllabic terms that potentially capture the nuances of meaning desired by the writer at the cost of readability and understanding. Instead, he uses very conventional, conversational language and layers it with imagery and metaphor that come together like poetry. You don't need big words to take readers to another world. You just need the right ones.
I am supremely excited about where the series will go next and waiting for the next novel is going to be a bit of a pain. But I'll be thinking about this most recent book for a while as I really process all that had happened and what may lie ahead in Dresden's future. And books that you can't stop thinking about are often the really good ones.
I envy the way Jim Butcher writes and I doubt that I'll ever be able to craft anything as beautiful as what this series has become. It boils down to amazingly strong characters and stories that allow them to explore their respective journeys with a true sense of agency. Dresden isn't necessarily the hero - he's just the guy we're following around. He's the wizard who does his best to help out the next person without necessarily knowing if that is enough to turn the tides of whichever greater conflict he's dealing with at the time. And that's why we love him.
books writing