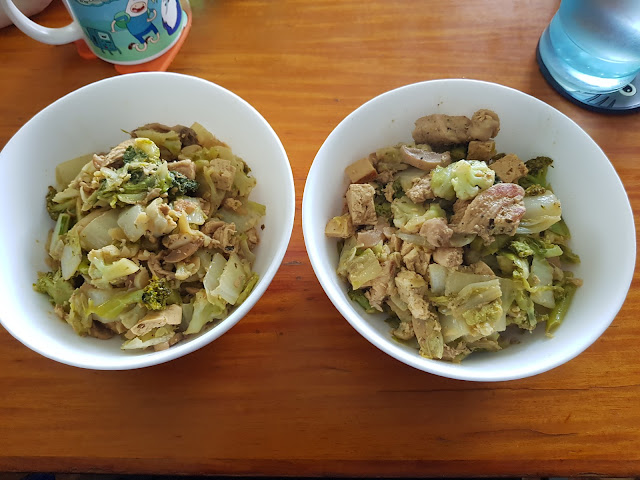 Metro Manila Community Quarantine - Day 149
I didn't have work today because of the Singapore National Day observance, a friendly holiday offset that takes place whenever a national holiday falls on a Sunday. But it was still a workday for Tobie, so it's not like we could both slack off for the day. So I had to busy myself in other ways.
I tried to sleep in a bit, but the colder weather in the morning helped me wake up at my normal time as if I had work. I stayed in bed a bit longer but eventually got up to get through my workout for the day - which was funny since my Nike Training Club app actually slotted today as a Recovery Day. But since I wasn't rushing to work, it felt like a waste not to do something. So I pushed through with the workout that had been originally scheduled for the day and even added an indoor jog to get more steps in.
I couldn't entirely escape work and had to address some financial obligations this morning. But once I had cleared my work stuff, I was more or less free for the rest of the day.
Normally Tobie and I split cooking responsibilities. But since I wasn't rushing to get work done, I offered to cook everything for today. We ended up with two chicken dishes. I did a quick stir fry with lots of veggies for lunch and for dinner, we ended up with chicken tinola. I try not to double-up on the same protein on the same day as much as possible, but we work with what we have and what veggies we don't want to go bad in the fridge.
Apart from finishing another BattleTech novella and getting started on my next novel, my main leisure activity for the day was taking the time to photograph more of the many Eaglemoss Star Trek Starships Collection models that are gathered around the house. It always takes a lot of time to examine each ship and take photos of each model from all sides, so I only cleared like another 18 ships in the collection with so many others still in queue. But really, it was an enjoyable way to spend the afternoon and I only wish that I had more time for it since the minutes go by so quickly.
It probably didn't help that I spent some time worrying about a few ships that I thought had gone "missing" but turns out never arrived in the first place so could not be covered for photo documentation. But there was a timely sale on the Eaglemoss site, so I managed to order the missing ships and called it a day.
Now I'm trying to rush through this blog and whatever else so that Tobie and I can play a board game before ending the night. Then it's back to the usual work grind tomorrow. And we might as well try to end things on a positive note given that the President is confirmed to record one of his meetings again, and it's anyone's guess whether that means they'll play that broadcast late tonight or early tomorrow morning.
Battletech books gaming holidays QuaranGeeking sietch life Star Trek tabletop gaming toys