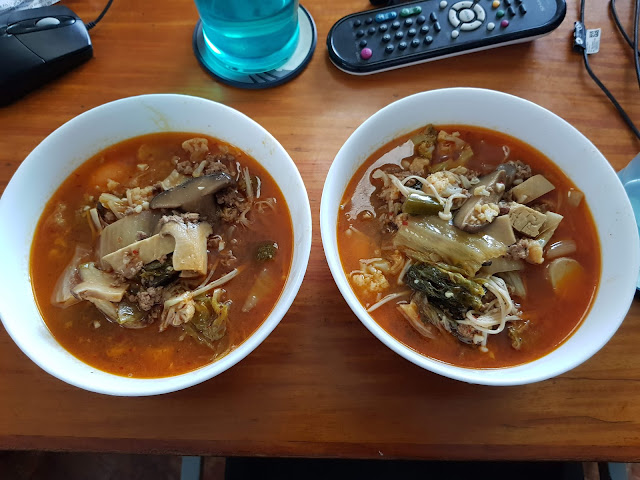 This morning I had to send out a reminder to the office that Monday is a holiday for us as we follow Singapore holidays instead of Philippine ones. While the two countries still share a good number of holidays throughout the year, there are many cases where they just don't align since (1) the Philippines has significantly more holidays than most of the world and (2) obviously the two countries have different priorities. And Singapore National Day is clearly a Singapore-only holiday.

That makes this weekend a long holiday weekend for me, not that there's much to do given (1) quarantine and (2) the fact that Tobie has work on Monday. So it'll just be a regular weekend for the most part - or as regular as weekends can be while Metro Manila is under MGCQ - and then I'll get to take it easy on Monday apart from chores and stuff. I'm bound to still wake up early because I am not a person that does that on the regular and I have my morning workouts to look forward to.

On the fitness front, I think I hit an upper limit this week given the overall increased intensity of my workouts since I increased the difficulty level from 2 to 3. It should be a minor thing, but it's only now that the app has been giving me 40- and 45-minute workouts whereas before most of them would be no more than 30 minutes. Plus there's the fact that I still jog during recovery days or after workouts that felt rather short and not enough to really push me, but I think I can still handle it.

The Nike Training Club app continues to think otherwise and towards the end of the week, it often reshuffles my schedule to retcon previous workouts as being bonus ones done on recovery days, thus reducing the total scheduled workouts for the week. It sometimes creates were conflicts like scheduling a workout that I had done earlier in the week for a future date but still retaining the fact that it is a completed workout - so when that new scheduled day comes along, the app tells me I'm already done. It's a minor issue and I can either (1) repeat the workout manually or (2) just jog instead.

My right arm has been especially sore after a boxing-style workout the other day. I may have put too much power/effort into my right cross sets and the pain hasn't fully gone away. Thursday was a recovery day where I only jogged and today I had a strength-based workout that I still managed to get through but with a fair amount of difficulty, especially for all the push-up variations. But things do feel a little tight, still. A massage would be great, but we won't be able to even consider one until we drop two more quarantine levels.

The Nike app has scheduled tomorrow as another Recovery Day, but at the very least I'm going to jog hopefully 7km AND maybe follow a yoga routine to get some good stretching in. I'll know more based on how I feel when I wake up. Addict much? Maybe. But seeing my progress and feeling stronger and more active is quite addicting in itself, I'll admit.