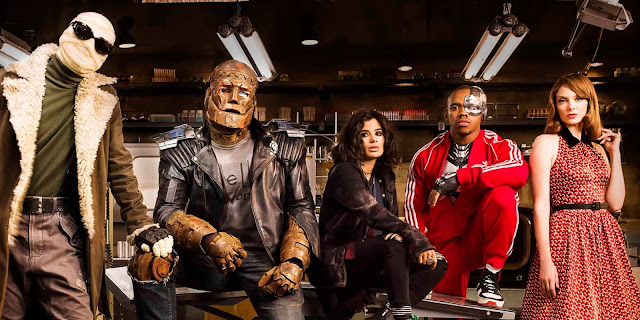 Metro Manila Community Quarantine - Day 120
When our Saturday game got canceled, we didn't really have any other major plans for the night. So one thing led to another and we ended up finally starting on the Doom Patrol TV series since it's now available on HBO Go Asia. This is a particularly interesting development since in the US this is an HBO Max title. Thus it could be a precedent for other HBO Max shows (Adventure Time Distant Lands, anyone?) could also end up being released through this service.
I've yet to read any of the Doom Patrol comics, so I didn't quite know what to expect from the series. Of course, it turns out to be a meta-narrative mind trip that is certainly giving the likes of Legion a run for their money. It has a cast that includes a few notable names and based on Tobie's reaction to the show thus far, it seems they're doing the comics justice in terms of their depictions of the characters and the general tone of the stories to boot.
What a departure from Jane the Virgin, which is the last series we finished before diving into this adventure. And for the record, that was quite the lovely finale. It was a beautiful celebration of a lot of the key themes that saw the show through five great seasons.
Now I want to read the Morrison run of the comic that helped inspire this craziness because we're loving this show to bits.
comics sietch life television