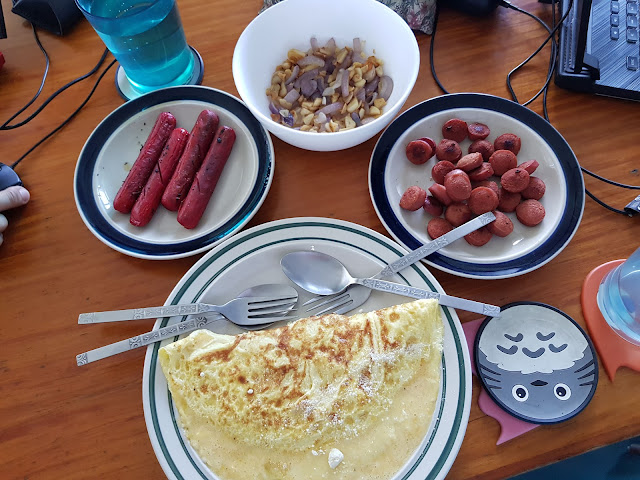 Metro Manila Community Quarantine - Day 74
While I often joke that I have never been diagnosed with anything close to OCD, I will also be the first to admit that I'm quite the creature of habit. And today was probably a good example of why maybe I should consult regarding the severity of my adherence to habits at times.
When I woke up today, my Fitbit was dead. This isn't the first time it has ever happened to me - sometimes I got to bed without checking on the power levels. It's a pain because I forfeit having any sleep data but life goes on - normally. But his was the second time this had happened within the week, which is a bit of a red flag. I had already had the feeling that my Fitbit Alta HR was losing power sooner than it should, but this sort of confirmed things. But that should be a minor problem, right?
So I got up, set up my charger, and killed some time, hoping to get enough of a charge to track my morning workout and then leave it charging again until the time for my first step interval at 10:00am. But when I checked on it, the Fitbit seemed to be stuck in a weird reboot loop that would only end the moment I took it off the charger. Then it would just die. Cue mild panic that my Fitbit was actually dead. Needless to say, it was a struggle to get through my workout since I was very distracted pondering if there were other ways to revive it.
This was something that had been brewing for a while, admittedly. I've had a few lines of what I can only describe as "dead pixels" in different parts of my display and the number of non-functional lines was potentially increasing. Tobie was already telling me to order a new one but I was holding out since (1) it was still tracking my activity data and (2) I had just ordered extra straps for it. And this was even before I had noticed the battery issues, so it has been one thing after another. I've only had this for about a year and a half and I was hoping to get more mileage out of it.
By the time I had logged in for work, I had already mapped out plans to check out the Digital Walker at One Bonifacio to see if they had Fitbits. I had already checked their social pages week to confirm they were open since the possibility of getting a replacement had come to mind a few times with the increasing challenges. It was more a question of which Fitbit to get, which is a weird decision to make since they all seem so similar and claim to have so many features and yet each model has different features. Add on a website without a helpful comparison chart and...I ended up getting the bare minimum heart rate monitor model, which turned out to be the Inspire HR.
My Fitbit Alta HR actually came back to life after extensive charging despite randomly showing me that it was either 20% charged or fully charged before dying the moment I unplugged before I cemented my decision to buy a replacement. And like the step-tracking junkie that I am, I wouldn't even let a day go by where I'd potentially miss my daily step goal and my interval step goals between 10:00am and 10:00pm. It sounds silly, and it probably is to some degree. But hey, we all have our priorities. And I've managed to mostly keep up with my activity goals the whole time we've been in quarantine and I had no plans of breaking that cycle. Admittedly, routines are a big comfort to me, and disrupting any of them is painfully stressful at times. And the quarantine has already ruined so many of my daily routines at this point and I guess I wasn't ready to let another one slip.
health inner ramblings QuaranGeeking sietch life technology