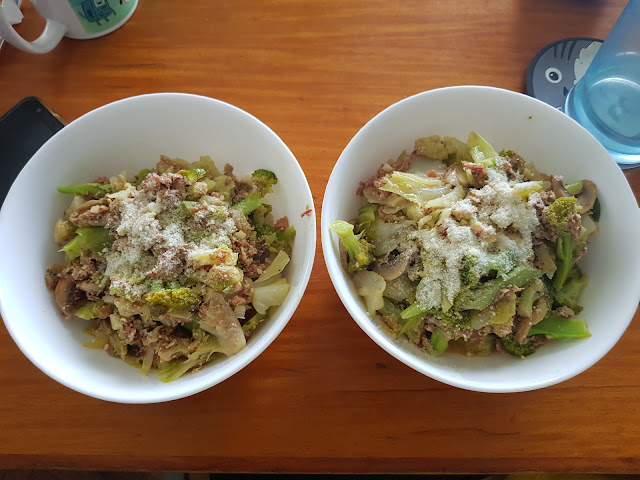 Metro Manila Community Quarantine - Day 69
After watching friend after friend decide to cut their own hair along with watching many YouTube videos on simple enough men's haircuts to try, we finally got our own hair clippers as part of this week's grocery run. Tobie's hair was in dire need of managing and I had two months of build-up to deal with as well. Luckily Tobie found a pretty affordable set that was like a third of the price of a similar Philips model. But we just needed something functional with sufficient accessories to get through this quarantine.
I initially figured we'd wait for the weekend to find time for it, but my excitement won over and we ended up giving it a go once I had finished my workday.
I went first since a crew cut is pretty simple. Tobie wasn't comfy being the first to try, so I did my best to get the prep work done based on the videos I had watched. It was pretty interesting to see all the hair fall away - I didn't think a haircut was THAT urgent but then all the hair on the floor told me otherwise. I couldn't quite manage the back on my own and hard to get Tobie to get over his own trepidations and help even things out. The end result was pretty good, although probably not a full "fade" on the sides as I was aiming for.
Tobie's haircut was harder since it turned out that our little kit only had until a #4 guard when the videos I had been watching involved #6 and #8. I initially wanted to just sort of trim his rather lengthy, unruly hair following one of the video methods but given we had to make do with the #4 guard that had also been used on me, the result was a compromise. We ended up cleaning up the sides significantly while leaving a lot of hair on top, which Tobie trimmed a bit but mostly left alone. The end result was something a lot more 80's but at least got the hair away from Tobie's ears and eyes and looks decent enough.
I may not need to go back to a proper barber anytime soon and at the very least Tobie won't end up like a shaggy dog again. It took us 10 weeks of quarantine to get to this point but hey, we have to be prepared for more of this to come.
QuaranGeeking sietch life Tobie