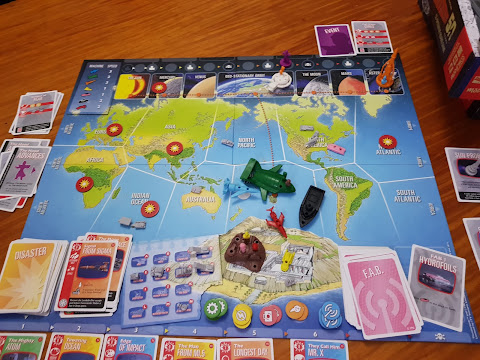 Metro Manila Community Quarantine - Day 29
Tobie was able to come home yesterday after spending a night with family for his father's wake. I was prepared to spend the whole weekend alone and not say a word aloud, but I was quite happy to have him back sooner than expected. It's not quite over, of course, but I appreciate what I can get considering the situation. In an effort to exert some sense of normalcy over everything, we played two rounds of the Thunderbirds board game after dinner and a few rounds of the different Star Trek Fluxx sets to boot. It helped a bit.
Tobie and I went to visit today. We're not sure if the streets have always been this empty despite all the lockdown/quarantine talk but we only got stopped a maybe two times by people who just took Tobie's temperature. I sat in the back seat as a social distancing measure and none of the guards or cops ever bothered with me, so that was weird. But yeah, BGC to Paranaque in less than 30 minutes.
It was a little weird to be at the sake given the COVID-19 situation. Upon arriving we were sprayed with a sanitizer that the family had procured for their chapel. Everyone was wearing masks and sometimes gloves and different groups were having hushed conversations while seated awkwardly apart to maintain some sense of physical distancing. Every time someone arrived there would be the waves from afar and the effort to show condolences and concerned while most of our faces were obscured by different kinds of masks.
A lot of times empathy is most often expressed through touch - this could mean something as intimate as a hug or even just sitting closer to someone as they process their grief. The health crisis of the present means none of that can really happen and so it feels like you aren't doing enough to show your respect and support as you stand a meter apart? It all just makes the already unusual circumstance of a wake even stranger, somehow surreal even just because we have to make sure we balance flattening the curve with paying our respects.
We grieve as best we can under the circumstances. We process loss in whichever way works best. We keep moving forward. We live to make the most of each new day.
deaths family gaming health inner ramblings QuaranGeeking sietch life tabletop gaming Tobie