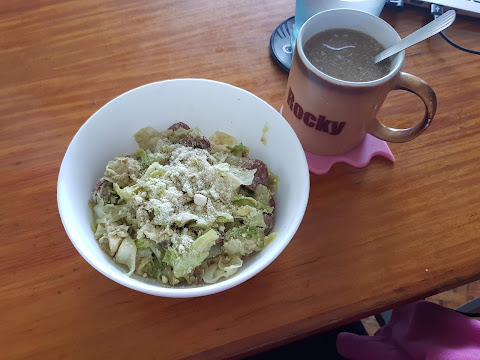 Metro Manila Community Quarantine - Day 28
For the better part of the last 24 hours, I've been alone at the Sietch. Thankfully Tobie didn't experience any issues going south for his dad's wake and then was able to come home today for a change of pace. He's in dire need of sleep and we'll make sure that happens tonight.
From the time he left, I barely said anything aloud - this being something I realized only in hindsight. Just goes to show that Tobie is the main person I speak to since (1) we live together and (2) he's the main person I get to speak to on the phone. And since Friday wasn't a workday, I didn't even have those video conferences to fill up the time.
For a change of pace, today I tried going on Facebook Live while I prepared lunch. But with no more than 2 viewers at any particular time, it ended up feeling more like I was just recording a video of me talking to myself. The cooking was totally incidental and off-camera since I couldn't position the phone in a way that showed what I was actually doing. Maybe I should put it on the stove itself next time or something.
What I did fill up my time was me unboxing Transformers purchased earlier in the year, reading digital comics, continuing reading the Mistborn series, finishing the 8th season of Suits, and getting started with Farscape. So it wasn't like I didn't have things to do. But naturally, I'd rather have spent more time with Tobie. But this is fine - I also didn't want to complicate things for him further. He has more than enough to juggle as it is.
It's all so surreal to deal with this now. It's weird because of the COVID-19 situation so you know there are people who want to visit but also don't want to get cited for creating a public gathering, which would be in violation of quarantine regulations. It's weird because it's Holy Week, which is typically a time for like nothing to happen as the country shuts down and focuses on religious observances. So for this to happen now, I dunno, just feels very off-kilter. But things happen when they happen and we just deal with things as best we can.
We'll see what tomorrow brings.
deaths family inner ramblings QuaranGeeking sietch life