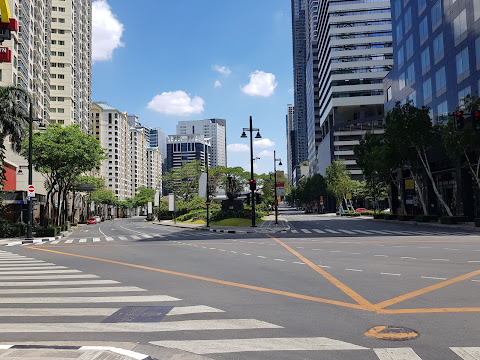 Metro Manila Community Quarantine - Day 21
For the past year or so, my Saturdays have always involved visiting the parents, who thankfully also live in BGC. When the quarantine went into effect, I was initially worried that this would make such visits difficult, but thankfully we've gotten around it. Sure, queuing for stuff at Mercury Drug now takes at least 2 hours and I may have been declared as a resident at their condo to avoid potential complications from my visits, but what is more important is that I'm still able to check on them and make sure they're okay. Plus it's the one time in the week that I consistently get to walk around BGC again and feel like things are a little closer to normal.
Fridays are starting to become Tobie's regular grocery days and he tries to queue as early as possible to minimize his time at the store. He primarily has to replenish our vegetable supply as I continue to lean heavily on greens as I continue to follow the keto diet. There's a natural amount of stress that goes with Tobie potentially exposing himself to all the fun stuff out there, but we continue to try balance routine and risk.
After different experiments, we have a decent grasp of how best to run tabletop RPGs online. Thus far, Discord has been the most stable platform for consistent audio regardless of the number of players. Roll20 is solid for sharing visuals like character images and of course player sheets but their audio service is oddly inconsistent. The experience is never quite the same as playing in person, but it still helps through this difficult quarantine period.
I work out almost every day since I've configured the Nike Training Club app to assign me workouts 5-6 times a week. I did this since the app can be finicky and can often throw in surprise rest days after evaluating my activity for the week thus far. I've mapped out where to play my yoga mat and where to do other exercises despite the limited space of the Sietch.
Last Saturday we tried having some drinks while talking to a friend on a video call. It didn't quite feel the same as going out to O Bar and I don't know if we'll ever try that again. It felt weirder than it should have been and I guess that's because of how it acts more as a reminder of what we can't do instead of a unique way of connecting with friends.
This is our new normal for the foreseeable future while we remain in Quarantine. Some news has indicated that any extensions of the quarantine won't go beyond 15 more days beyond the original end day, which I assume is more an economic estimate than a public health decision. But we'll see. We all want to get out but we also want to make sure that we've done enough to seriously dent the spread of COVID-19 throughout he country.
family gaming health QuaranGeeking sietch life tabletop gaming