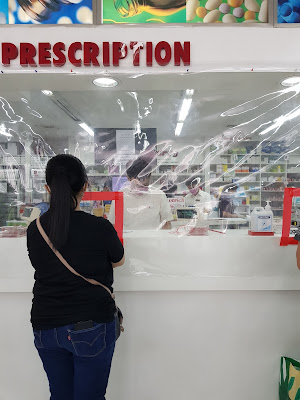 Today I queued for 2.5 hours to help resupply medicines for the family at Mercury Drug. It wasn't the most pleasant experience as beyond the long wait, a lot of the time was spent waiting in the summer sun as the guards did their best to manage the different queues for people who only wanted to do grocery shopping, people who needed to buy medicines and priority cases like senior citizens.

The heat definitely added to everyone's stress as you could hear a lot of grumbling about the queue system they had arranged for (e.g. people questioning what to do if they wanted to shop for both types of items) and the inevitable accusations that people who had gotten in through the grocery queue (which was the faster line) would eventually line up for medicines. I have no idea if that was true or not - I just tried to be patient and got some reading in while waiting.

Yesterday Tobie did a supply run and it took him over four hours to get through SM Supermarket at SM Aura. Since he brought his car, he entered through the basement where the mall had set up a fairly organized queue including seats for a lot of the folks in line and efforts to also regularly sanitize those seats when the opportunity presented itself. This felt long, but apparently, it can get a lot worse.

On social media, I followed along with a friend who queued to grocery at Waltermart Makati, where they had set up an oddly complicated queue that snaked through the mall starting on the first floor then up to the third floor to end at the grocery on the second floor. That process took over four hours as well, but I guess at least there was a system. Other friends have shared that getting through the grocery at SM North Edsa took over 6 hours, so yeah it's pretty crazy out there.

I guess more people are making the effort to shop now as initial supplies acquired right before the lockdown are probably starting to run out, forcing people to head out. At least there are things to buy, so that's something to be thankful for. I'd freak out more if the grocery shelves wouldn't turn out to be poorly supplied, which would make queueing not quite worth it.

I've given up on attempts to pursue online grocery providers as our quarantine logistics infrastructure is pretty strained and is barely able to support the deluge of orders. Everytime I try to assemble an order, at checkout I'll find that no delivery dates are available.

Finally, over the course of my walking around BGC, I noticed that more convenience stores have opted to close entirely in recent days. At the very least it seems like most Lawson branches have closed their doors while even places like 7-Eleven had shuttered some shops that primarily catered to BGC's office workers. More signs that our overall infrastructure can only handle so much and stores aren't seeing the value in staying open if they can meet certain income minimums.

As our number of confirmed COVID-19 cases has just crossed the 1,000 person threshold, it really feels like this quarantine isn't necessarily going to end on 14 April as originally promised. The battle against this disease may take longer than that.
health inner ramblings QuaranGeeking sietch life stop the presses