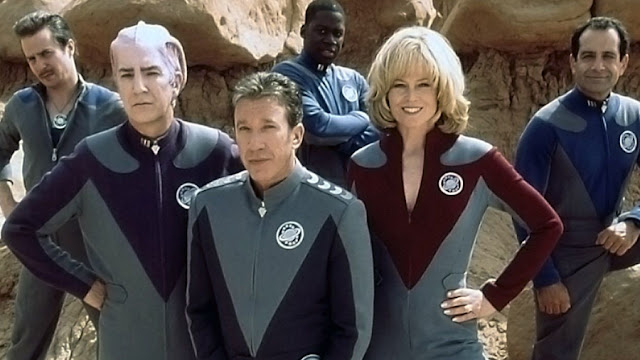 Today Tobie and I got to watch the Galaxy Quest documentary Never Surrender, which is a strange sentence to even put together since to many, Galaxy Quest was just some random movie. But if anything, this movie remains to be one of the greatest celebrations of fandom and is considered by many to be a Star Trek tribute movie with so many layers of delight to it. It's a movie that keeps on giving and it's nice to see that there's so much love for it still.

When you look back at the movie, it really is quite surprising how it all came together. I just thought the cast alone was a crazy confluence of talent gathered in one place but the documentary helped to shed light on everything that happened behind the scenes and how we could have ended up with a  very, very different movie.

Oh some level, I've always envied that sort of passion that diehard fans get to demonstrate when they make the effort to even go to big conventions and dress up as favorite characters. The notion of conventions stresses me out and I don't feel invested enough in any of my fandoms to want to brave crowds for that sort of thing. I've had very limited success with cosplay. which I know ties a lot to my own challenge when it comes to my body and thinking that I can't pull costumes off so better not to bother. Tobie managed to get me to dress up a few times for certain Halloweens but I've never been the one to really initiate that sort of thing because of that degree of discomfort.

But hey, enough of that melodrama. I'll get over it. And with the help of brilliant media creations like Galaxy Quest, there are a lot of reasons to celebrate the things we love in our own way.

Aside: I know I used to have a bit of a crush on Justin Long and it was probably mainly because of his role in this movie because what geek wouldn't find the hero nerd of a movie so endearing? Is can't just be me, right?
inner ramblings moving pictures