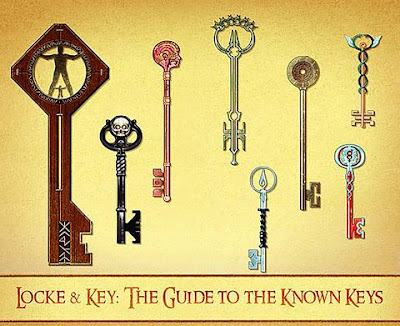 So we just finished the first season of the Netflix adaptation of Locke & Key and I'm...a little underwhelmed with how it ended? I fell in love with the comics sometime around the end of the first volume, Welcome to Lovecraft, and the limited series remains to be one of my favorite comic book experiences.

Learning of the Netflix series got me pretty excited for how they'd adapt it and try to bring this world to life because the very concept of all these magical keys does make for great story potential and is totally TV-worthy. And the first trailers for the series did seem quite promising with some great depictions of keys established in the comics and hints of entirely new keys that we had never seen before.

The actors selected to portray the kids turned out to be pretty well-thought-out and did a great job of bringing the Lockes to life. most of the story of the trauma that they all carry nicely carried through into the series apart from how the writers decided to skip on Bode's sleepless nights. The mom just struck me as weird and didn't really resonate all that much but maybe she'll come into her own into the next season.

The choice for the antagonist was also pretty good and certainly a lot more attractive than the lady we originally got in the comic. The twists related to her character also felt right enough and most of the series maintained my general feelings of interest and excitement.

But the ending was...sad? It was a very TV ending I guess, one that needed to sort of wrap things up but also leave things hanging in order for there to be something to explore in a second season. But it just felt like there was a lot of stupidity going around despite how smart and clever the Lockes had proven to be in the prior episodes. But I guess that's as good as an ending we'll get at this point?

Watching the series has gotten me to start re-reading the comics because now I want to sort through all the stuff that had been lifted from the books versus what had been added just for the series. It has been a few years since I last read the comics and so a lot of the plot points sort of blur in my head and now I want to shake off the cobwebs for real. I'm sure the comic will remain to be the superior narrative, only because the comic book medium has a lot more flexibility than a TV show does. But I'm still going to give it a fair shake and follow the show for as long as Netflix is willing to comission more seasons of the show.
comics television