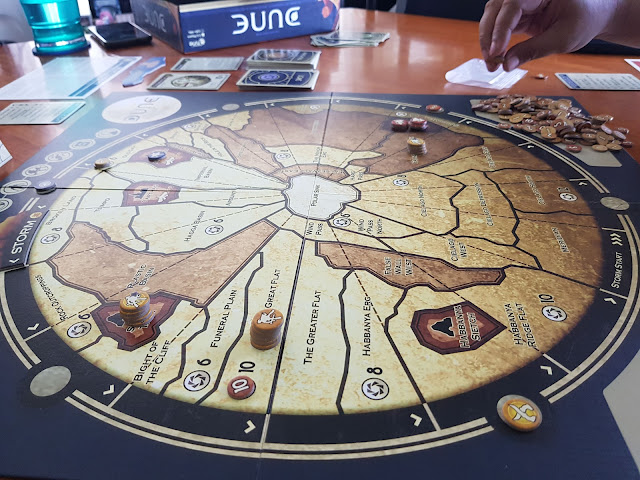 Wow, the Dune board game by Gale Force Nine is a delight.

I initially figured that it would just be a nice-to-have part of our collection like our copy of RISK: Doctor Who. We've never actually played the game since I'm not exactly a big fan of RISK, but I do appreciate having lots and lots of tiny Daleks in the Sietch. And the original Dune game that this one was based on was notorious for complex rules and strange interactions if the stories are to be believed.

But now that we've actually been able to play through a few sessions of both the basic and advanced rules of this game...it's a lot easier than feared. If anything, the system is pretty straightforward and the complexity lies in how crazy the respective faction abilities get and how things remain in such a delicate balance. If you don't pay attention to what your competitors are up to, one turn of distraction can result in you losing the game.

The basic game makes it easy to get into the game and understand the fundamentals of the ebb and flow of the game. But it's with the advanced rules that you really start to feel like the designers of both the original game and this revival really loved the book and put a lot of effort into bringing the different factions to life through the gameplay.

Dune is a game that doesn't necessarily feel like it's "balanced" if you believe in that sort of thing. But that's part of the brilliance of the game. Each faction is uniquely powerful in its own way and when you embrace what makes your faction powerful, you may find yourself at the right place at the right time to take advantage of an opportunity presented to you. And this will ultimately lead to victory.