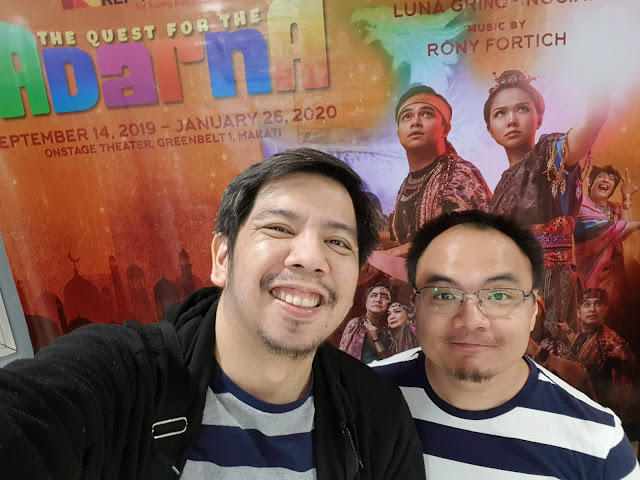 While Taal Volcano was apparently going through a phreatic eruption this afternoon, Tobie and I were scheduled to watch The Quest for the Adarna, an original musical based on the classic epic poem by José de la Cruz. It's an English-language musical oriented towards children and turned the rather unwieldy story into something close to a Disney tale.

The production was actually a lot of fun and we both enjoyed it far more than we have expected to. The narrative was tweaked to give us cleaner character arcs and a sense of a happily ever after. They also gave us a more modern strong female character as a princess so that both little boys and little girls had characters to look up to. Some bits felt a little rushed and I don't know how kids could keep up with the story. But on the flip side, there were a lot of great interaction moments for the kids and I'm glad that the audience was pretty game.

And that's a part of the show that you really can't script but is a key part to things - how much the kids were actually enjoying the production. I know my nephew has helped shift my appreciation for younger children significantly in recent months, but the audience was so much fun with the kids commenting on what our protagonist needed to do or gasping at the right moments.

We don't always book watch the children's musical in Repertory's regular season every year, but we might make more exceptions in the future.
all the world's a stage cultural victory