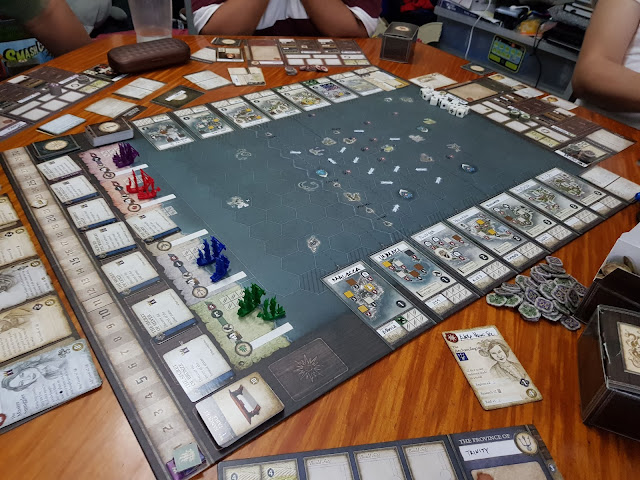 Last night we played through another session of Pandemic Legacy: Season 2. Our last session had been back in November and the level of challenge just continues to get more and more significant. Despite our best efforts, we didn't quite make it in time but it's just as well. We'll just have to try to get through the scenario again next time we have time to game.

Today it's time for our Seafall game, a campaign that has been going on for almost two years now. This marks session 12 and we're pretty deep into the lore of this game world. I've been in the lead in terms of points for a while now but it also means more advantages for everyone else to help them catch up. I honestly wouldn't mind giving way for a while if that means I can still snag victory later on. Fingers and toes crossed.

We still have unplayed copies of Risk Legacy and Betrayal Legacy waiting in the wings, but for now, we'll focus on these games first before starting a new legacy commitment. Heck, there's even our unfinished Detective campaign that's still waiting for us to return to the investigation. Fun times with campaign-style games!
gaming sietch life tabletop gaming